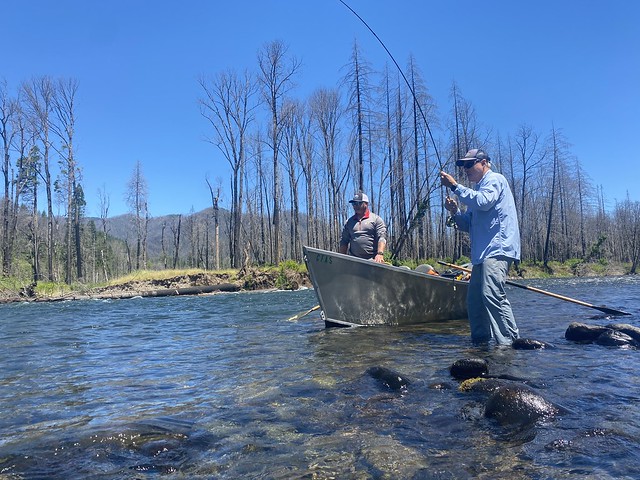 Water levels have come way down and our local rivers are fishing great. Wading opportunities on the McKenzie and Middle Fork of the Willamette Rivers have greatly improved. The heat has slowed some of the hatches but dry fly fishing has been the best it’s been since the March Brown Hatch. Look for some of the tributaries like Salmon Creek, Salt Creek and the North Fork of the Middle Fork of the Willamette to fish well in the coming weeks as water temps on those streams has come up.

We have scaled down our “hopper dropper” set ups of late. Smaller Chubby’s with smaller nymphs like “Tungsten 20inchers” Jigged Perdigons and Jigged Pheasant Tails are crushing it of late.

Mid to late afternoons Black Birds, Robins and other mid sized birds are out looking for Golden Stones emerging off the innumerable log jams on the McKenzie. That late afternoon period seems to be the very best for surface activity on the larger dries.

Critical flies to have this weekend and in the coming weeks include: