“LIFE” ON A TIN CAN – Fishing on the USS KIDD 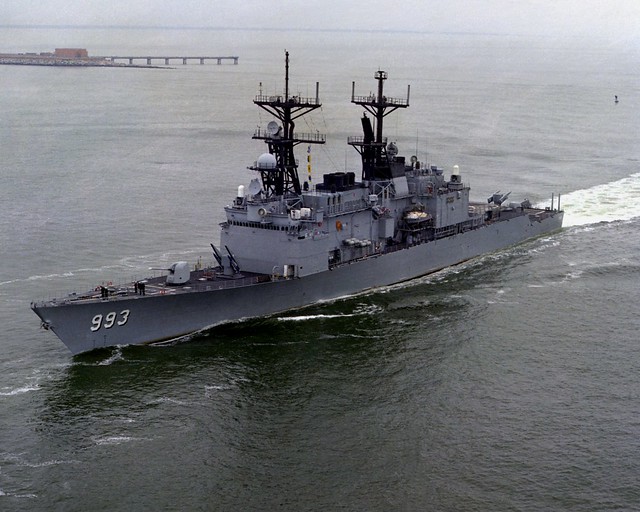 The fishing, the camaraderie, the adventurous voyages . . . ! We often kid ourselves – sailors – that our ships are “Tin Cans,” floating about on King Neptune’s Domain, at His Whim.

Long time customer Lou Olton share this grand tale of catching fish off his navy ship. Thanks for your service Lou and thanks very much for sharing.

. . . Twas the night before Christmas and all through the house, not a creature . . . . . WAIT, wrong Intro ! Now let’s get “reel”! Actually, best I can recall, it nearly was close to the Holidays, circa 1997. We, that is the USS KIDD, DDG-993 was scheduled for dry dock in Norfolk Naval Yard, where “she” was stationed, but the reasoning behind it unclear to the crew, which I was a “Plank Owner” of, and Sonar tech./operator 2nd-class (STG2 extraordinaire!).

Long story short, Captain Kearley informed us via internal comms that we were going to be doing a Drug Op on the West Coast. Great yet another Holiday Period away. This would be my 4th trip through the Panama Canal. Best I recall, as I previously said, Thanksgiving was approaching so we knew it would be warm at our destination – a Large rectangle running North-South from off the NW corner of Columbia to Panama’s Northern border.

My Navy career started in San Diego but quickly became an East Coast thing – 1985 through 1998, when USS KIDD finally did get the Dry Dock appointment; this time it was to Decommission “her”! That is a tale left for another time.

Being an Easterner, I was all too familiar with the Beach Fishing scene, but not with a Fly Rod . . . yet! That all started once I got to my 1st ship after boot camp my 1st Sonar C-school in San Diego. That got me to Jax. Florida and Mayport Naval Station and my 1st Fly Fishing Beach Style along all that golden sand. The Saint Johns River wasn’t far away. Pretty much self taught with my experiences as a freshwater trout guy growing up on Long Island (NY).

Now that you have some back-story, on with the Joys of Fly Fishing From a “BIG Yacht”! Turns out that our Captain was also a Fly Fisher and what we like to call – “a crew-members Captain”. Traditional Sundays-at-Sea would be an all day BBQ on the Flight Deck affair with civilian clothes optional if you were not On-Duty. 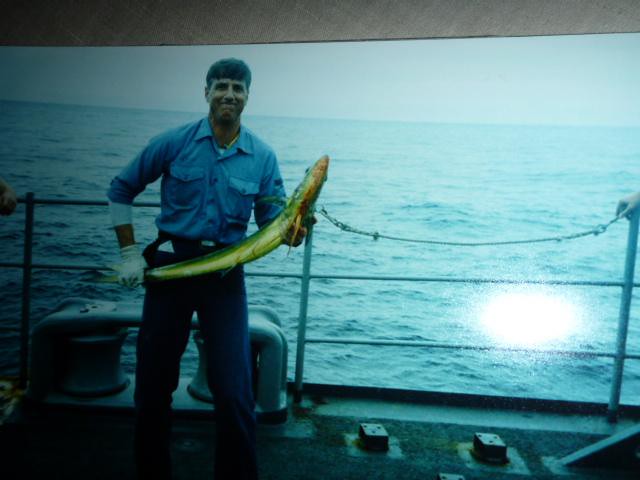 As you see from the 2 photos, one day I was soon to be On Duty and the other I was not. As we patrolled our “box” doing phenomenal trolling speeds I quickly got into the Fantail Fishing Mindset more often than not, but never diminishing my responsibilities as Sonar Watch Supervisor, Division Damage Control Petty Officer or Division Safety Petty Officer. Needless to say, when not Fly Fishing off the Fantail, I was a Very-Busy-Camper.

Floating Flotsam or “peoples floating junk” as it was, was all too prevalent, and in my eyes welcome, as it was (and will always be) a “Fish Magnet”. Fact is, the 2 Mahi Mahi were as a result of quick-casting to trash piles or pallets floating alongside the ship. 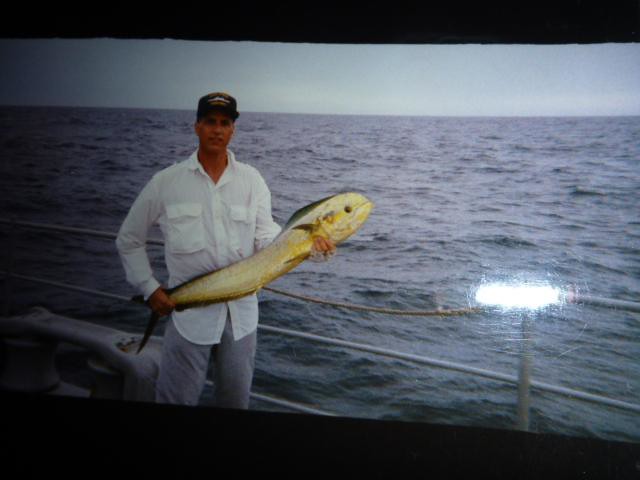 Catching Mahi Mahi became 2nd-nature, sort of, once the Boatswain-mates got the “Grease Monkeys” to make a long gaff to be able to snag the catch and hoist on deck. Then one beautiful Sunday-at-Sea I was at my usual starboard-fantail railing corner with my homemade sinking fly line set out to about 75 yards. Then I got stupid, remembering like it were yesterday, I feel embarrassed all over again telling this. It was “Hungry Time” and I needed a burger and coke. Here is the stupid me; setting the Sage RPLXI 10wt propped on the steel rail I made for a “mad-dash” toward the Flight Deck Ladder to fetch that “pale of water” (coke and burger). No sooner than halfway across the Main Deck (about 20 feet from the rail, and the rod), I hear a crew member fishing buddy YELL; “Petty Officer Olton!” – a simple Lou would have done. I turn and see My Fly Rod Quiver and Jump, seemingly as though it were Going Overboard . . . but it didn’t. Then I looked up and out to sea to see what I could see; following my Fly Line Backing, and there it was. Never in my wildest dreams did I ever think “OF THAT”! Turns out I hooked a Sailfish. Average sized I supposed. After all it was Sooo-far away in that instant it all took place. It was like that scene in Hemingway’s Novel when the Black Marlin made its first appearance with that leap out of the sea! Well, that image came later, but, you get what I mean, right?

With the rod and reel intact, I would live to fight another day . . . thankfully. That day would come, not surprisingly on another Sunday-at-Sea (when most of the fishing was done). SO, probably the next week? Kind of a dreary day, rain off and on and now nearing dust – about an hour away. The BBQ Crowd had thinned and mostly diehard fishermen remained, with a few interested bystanders watching the sun slowly sinking. Some Dark Low-Hanging Clouds off in the distance had me startled . . . then I saw IT!

I wasn’t sure at first what the disturbance was on the surface as it seemed so far off – guessing 2 or 300 yards. But this Disturbance was Moving from Right to Left – looking aft out over the railing. I, again in my favorite Left-hand corner, said to the other 6 or so fishermen, “Get ready guys, that is a sea of tuna and they’re heading our way!” Yup, pretty much just what I remember saying!

Sure enough, that “Wall of Wondrous” Fish turned a bit toward KIDD. I quickly let out more line and lowered my rod tip as close to the water as I could – still about 3 feet away. My Fly Line Rig consisted of a Very Heavy Sinking Head – I’m thinking it was 30 to 40 feet long; from a Saltwater Cortland Fly Line that I cut the HEAD from and attached to as much 30lb. Backing as I could fit on my Reel.

That was about 300+ yards. Point being; it worked, by golly it worked just as intended. Sadly though . . . I was the only one to get a Hook-Up. Now, I was in the Fight of My Life . . . Literally it seemed as though at the time! IF you’re familiar with those knobby cloth painters gloves (?). I had make-shifted a pair of Fingerless style (cutting the tips off, plus sewing a Leather Pad on my Reel Hand (Left hand Retriever) as a Drag Aid. Half Hour into the fight, those gloves were a “Godsend”. Whatever this fish was – thought I had a good idea it was a Yellowfin – you can’t be certain. It Dogged me bad, and the Drag was set all the way, and yet the line kept going and going and going, like the Eveready-Wabbit.

Seriously I was at wits-end and I asked a young Lieutenant JG, standing watch at the time / radio comms in-hand, if there was any way he could get the KIDD slowed or stopped so I could land the fish. No Joke, that is how it went down, . . . and with a grin on his face (me too), he called to the Bridge and asked JUST THAT ! Surprise, Surprise, surprise . . . Captain Kearley Came Through. Then HE showed up on the Fantail . . . “Oh Boy,” I thought; shits gonna hit the fan now. This is when I 1st learned that OUR Captain was indeed a Fisherman’s Fisherman and fly fisher too-boot. It took, all told, about 45 minutes (guessing) to get that Yellowfin alongside and gaffed. I had to bang the head into the deck a few times to stop the insane thrashing about, but once I was able to lift it up, I could tell it was gonna be a Big Feast come Next Sundays at sea BBQ.

The “Boardroom” officers-mess got their sushi fix and some steaks and the crew did just as well that next Sunday at the Tuna-BBQ Feast . . . yea there were still hot dogs and burgers. Gotta say, of ALL the Navy Cruises I’ve been involved with – 3 ships, trips to the Mediterranean, off West Africa, Bermuda (triangle), Cuba, Caribbean, All of South America (around the Horn / UNITAS), Louisiana (Mardi Gras), Panama, NYC (Fleet Week) . . . hmmm, what am I forgetting? Needless to say MY time in the Navy was a “Circumstantial” Dream Come True . . . and by that, I’ll have to end it — for another “story” could be brewing . . . . . . !?.