The Future Management of our Salmonid Fisheries – OP ED 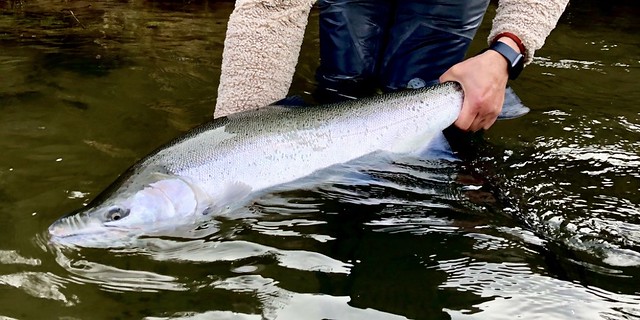 From Native Fish Society – In an Op-Ed published last month in the News-Review and reprinted on our website, retired fisheries biologist and wild fish advocate Jeffrey Dose discussed the current state of Pacific Northwest fisheries management and called for the closure of the Rock Creek Hatchery on Oregon’s North Umpqua River.

The Future Management of our Salmonid Fisheries

Jeff Dose is a retired Fisheries Biologist and an outstanding wild fish advocate. For 31 years of his 35 year career Jeff worked in the Umpqua basin and for 24 years as the Fisheries Program Manager for the Umpqua National Forest. Jeff continues to advocate and share his knowledge for the conservation and restoration of wild Salmonids throughout the Pacific Northwest.

Recently, Jeff wrote this Opinion piece in regards to our current state of fisheries management pertaining to the Rock Creek Hatchery on the North Umpqua River. It was published on December 3, 2020, in the Roseburg News Review. His outstanding experience with wild salmonids adds a wonderful perspective to the future management of the fisheries in the Pacific Northwest.

It’s time to start looking ahead on our rivers.

Restoring abundant runs of wild Pacific salmon and anadromous trout to the rivers and streams in the Pacific Northwest has risen to high levels of importance. There has been a large expenditure of public and private funds over the past five decades in an effort to prevent extinction and restore some measure of historical abundance. This is certainly true here, in the Umpqua River basin, where our fish runs support a multitude of recreational and commercial enterprises. There is also a considerable concern for some greatly diminished populations.

The North Umpqua River has one of the most diverse populations of wild salmon and anadromous trout in coastal Oregon. In addition to the wild populations, there are artificially produced populations. Large numbers of juvenile spring Chinook and summer steelhead from Rock Creek hatchery are released into the North Umpqua annually.

The historically large and intense wildfires that started in early September of this year caused loss of life, property, and infrastructure. Rock Creek hatchery was nearly destroyed by the Archie Creek Fire. Reconstruction of this facility has been estimated to cost up to $15 million. Even before this fire, Rock Creek was a compromised watershed with very poor water quality. The impacts from this intense fire, as well as suppression actions and salvage logging, will further degrade the Rock Creek watershed for decades. Additionally, anticipated impacts from climate change will further retard or prevent meaningful watershed recovery.

Pacific salmon, broadly defined to include anadromous trout, are a truly remarkable and successful group of animals. Through evolutionary processes such as natural selection, salmon have been able to persist, and even thrive, by developing some rather unique and impressive characteristics which enhance their genetic diversity.

Managing salmon resources involves preventing overharvest, protecting and restoring habitat, managing hydro and other dams, and augmentation of wild populations with hatchery production. While counter-intuitive, large-scale hatchery production does not usually produce more fish and can seriously reduce fitness of wild populations. Current hatchery practices, which are a result of artificial mate selection, are antithetical to the goal of sustaining wild populations. Additionally, hatchery production requires a large investment of funds that may be better spent on habitat acquisition or restoration, alternative energy sources, law enforcement, increased research, and better monitoring and evaluation. It is not unusual for the return of one hatchery fish to cost hundreds or even thousands of dollars. The majority is paid for by taxpayers and ratepayers, not from the sale of licenses and tags.

Among other effects, genetic changes from hatchery introgression are contributing to salmon declines. Most legitimate, peer-reviewed research has shown significant reductions in wild salmon and steelhead populations when hatchery fish spawn with wild fish, even at fairly low levels (~10-15%) of hatchery fish. In addition to the genetic effects, impacts to wild salmon often begin as soon as hatchery fish are released into the rivers and streams. These include disease transmission, competition, direct predation, altered migratory behavior, and altered predator survival and behavior.

Despite the large body of scientific information that documents the damage, there has been little real change in the current hatchery/harvest paradigm. Similarly, there has been very little change in land and water uses in many watersheds that adversely effect salmon habitat. Successful, widespread restoration of wild salmon stocks will require a significant paradigm shift from current approaches. Many researchers have concluded that for restoration programs to succeed, there must be a shift away from simplistic technofixes — such as hatcheries for low fish numbers and log structures for poor watershed conditions — to ecologically-based restoration of watershed processes.

I fully understand that many of my fellow citizens, particularly some avid anglers, have complete faith in hatchery programs and strongly resist any attempt to reduce them. Some even call for large increases. I believe that, for the most part, they are well-intentioned but short-sighted. Although the Archie Creek Fire caused wide-spread devastation, it also provides an opportunity. An opportunity to decommission the Rock Creek hatchery without the large expenditure of public funds that would be required to rebuild it. It is up to us to determine the outcome. I, for one, would like to see a change in the current mind-set, a change that has a chance of achieving robust populations of all our wild salmon and steelhead populations in the North Umpqua River.

For more information in regards to the North Umpqua River reach out to our Southern Oregon Regional Coordinator, Kirk Blaine at kirk@nativefishsociety.org or contact the Steamboaters at steamboatersboard@gmail.com. Native Fish Society will continue to advocate for abundant wild fish, free-flowing rivers, and thriving local communities throughout the Pacific Northwest.