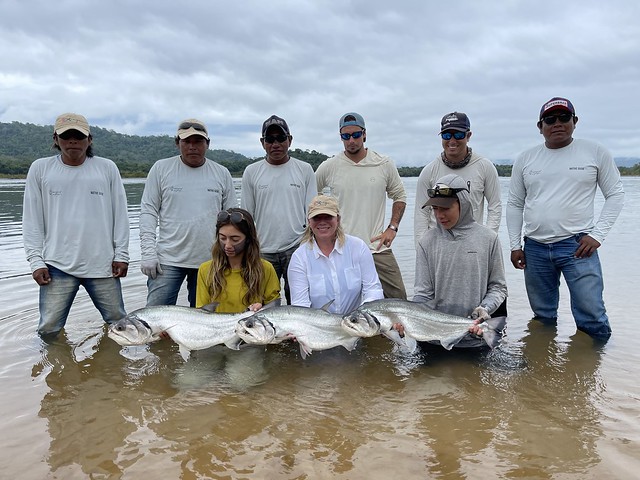 James Cameron’s film Avatar is said to have been inspired by the Xingu River Basin. My family and I were lucky enough to visit Untamed Angling’s Xingu River Lodge and it’s easy to understand the inspiration Cameron felt. This incredible river basin lies in the Southern Amazon Jungle and unlike many rivers that eventually flow into the Amazon the Xingu remains clear when the rainy season approaches. As we boated up the river from a small airstrip near one of the Kayapo Native communities it was immediately evident we were in a volcanic region. Unlike the sediment rich bottom of most Amazon Basin rivers the Xingu is rocky, in some ways reminded me of a mini Williamson River in Southern Oregon. Shallow rocky riffles gave way to massive pools, the river would widen again thinning out with rapids, islands and jagged rocky features. In the dry season August-September the river is low, warm and clear. Peacock Bass, Matrixa, Pacu, Piranha, Bicuda and Payara or Vampire Fish inhabit the runs, riffles and pools of the Xingu. 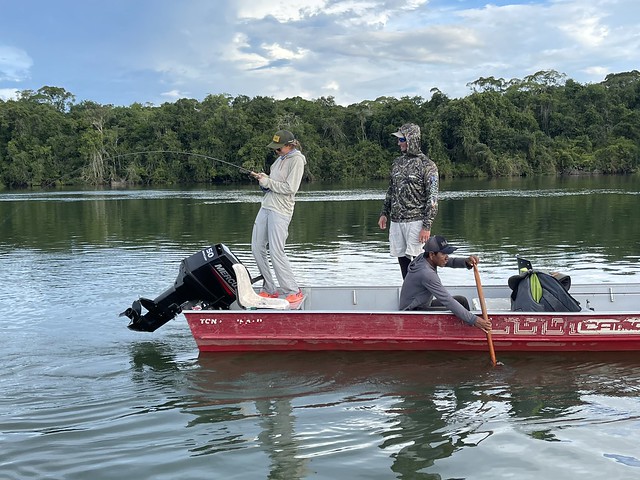 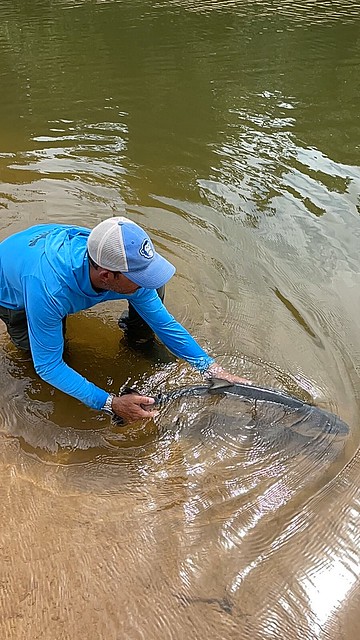 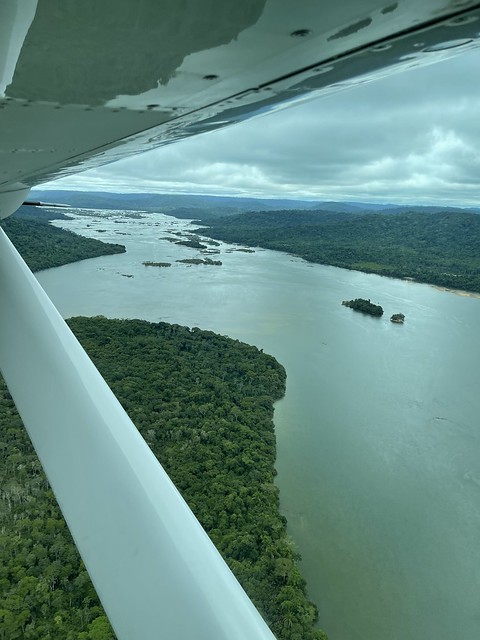 We arrived to a rising river and moderate air temperatures. November can reach 40 degrees Celsius but we were lucky to be in the mid 20s Celsius throughout our week. Afternoon rains brought the humidity way up and the biting insects were in full force. During the dryer months insects are not as prevalent but this week we needed to cover up and lather on the repellent. 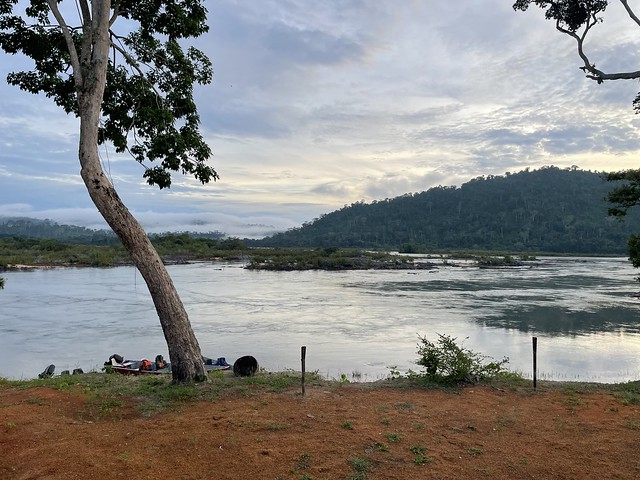 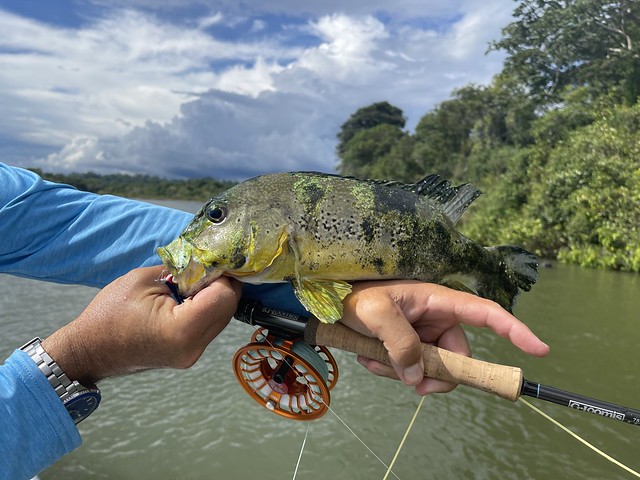 The fishing day started early with 6:30 breakfast and departure to fishing between 7-7:30am, the focus was on Payara (Vampire Fish). Nobody in our group had ever caught a Vampire and we were excited despite the lodge manager Marcos setting the expectations that could only be described as steelhead like numbers 1-2 fish per session was going to be considered really good. By 8:30 we wondered what Marcos was talking about, fishing was incredible! Numerous opportunities allowed us comprehend and execute the powerful strip set required. Vampires are super strong and once hooked they try to rip the rod out of your hand. We had rolling and feeding fish in pools all week and fishing was simply phenomenal, we were very very lucky to happen on this incredible week. 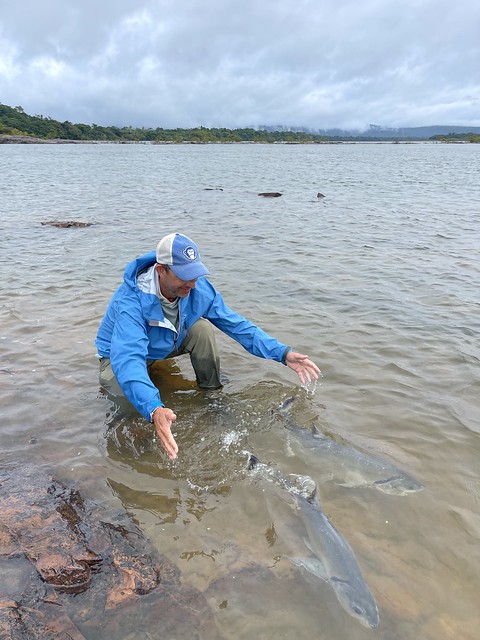 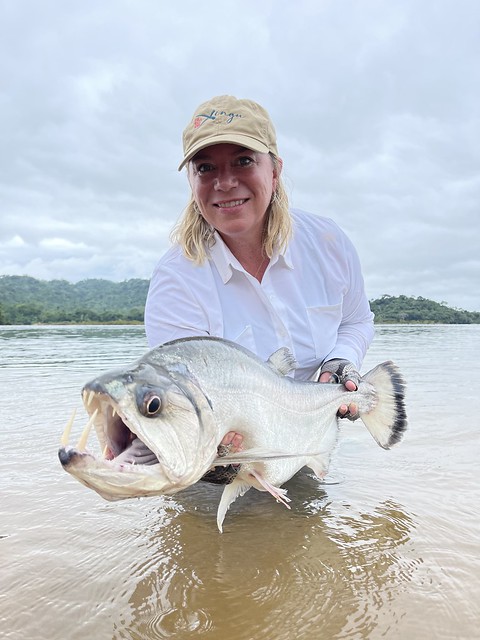 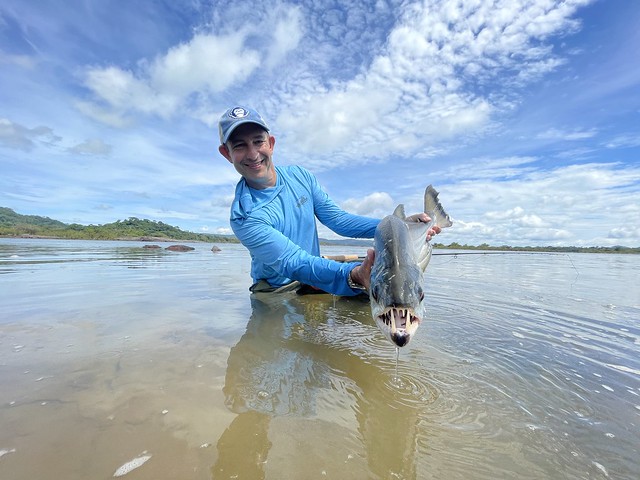 Untamed Angling once again were superb and professional operators. We were met in Manaus and guided through a quick covid test, whisked to a nice hotel and informed of the scheduled flight to the jungle the following morning. All schedules were followed exactly as planned, staff was super helpful and responsive to any request. Guides were awesome and we loved the cooperative approach with the local Kayapo Natives. Untamed, FUNAI, and NGO’s are working with the Kayapo to protect native lands, enhance ecological tourism, document Kayapo history, culture and more. Kayapo natives own and operate the boats we fished from. The Kayapo are enthusiastic and skilled in navigating the river, and positioning two anglers to chuck heavy sinking lines and 4/0 streamers into deep pools where the Payara live. It was fun to have four languages going in the boat, Portuguese Brazil’s tongue, Kayapo, Spanish (some of the guides at the lodge) and English. 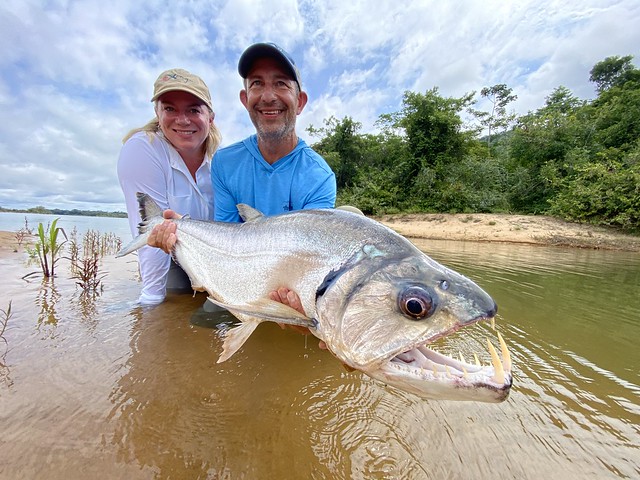 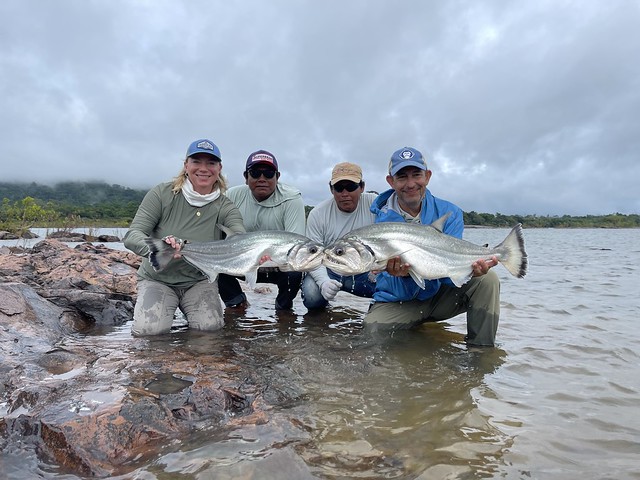 In dry conditions more opportunities for Peacock Bass, Matrinxa, Pacu, Bicuda and Piranha exist. During our stay we spent some time fishing for these other species but the fishing was so good for Vampires we didn’t do as much as we could have. When we did, we got a sense for the “Jungle Trout Fishing” available at Xingu. It’s a blast to cast a foam trout fly like a Fat Albert or Chubby at the bank for fish that are looking for berries, seeds and nuts falling from the trees. Small clousers were great as well. When afternoon clouds and rain blew in one afternoon we got a sense for how many of the other species are available. We got to see Pacu rising like a trout chomping on leaves and eating seeds being blow into the water. 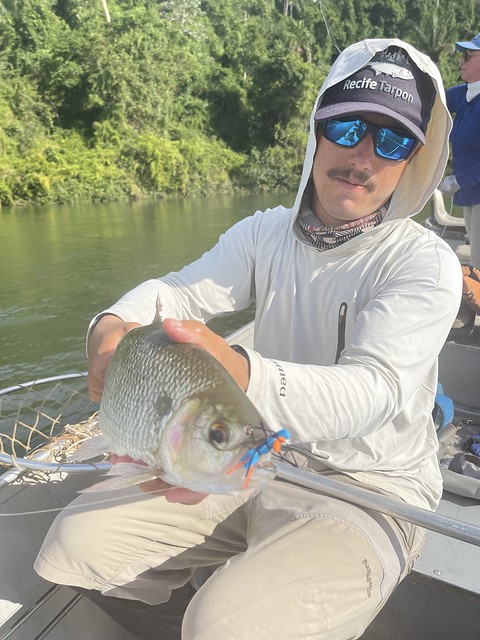 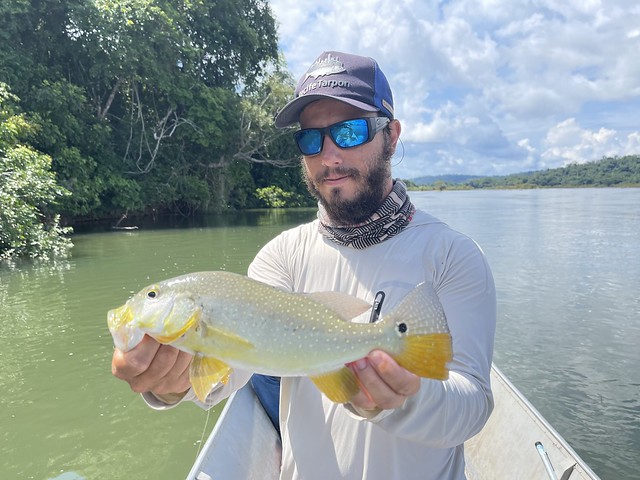 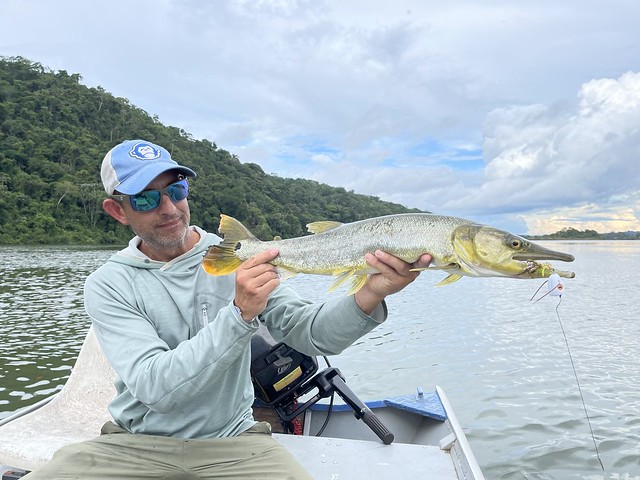 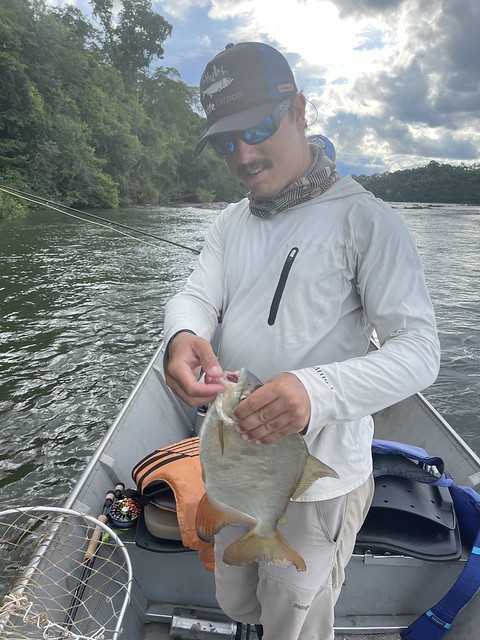 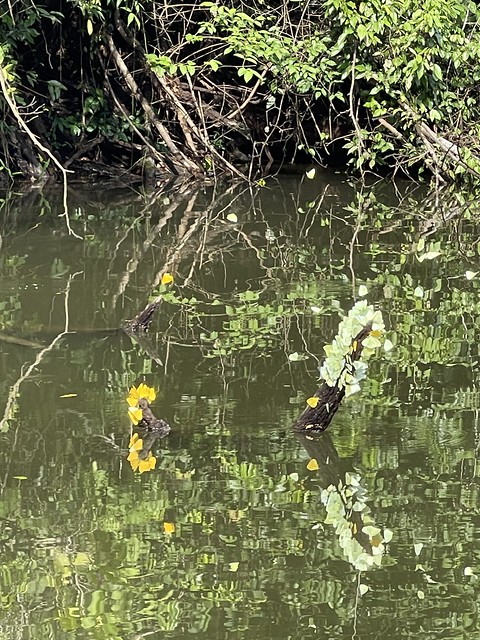 Overall this trip was absolutely amazing. I can’t recommend it enough. Xingu has only been open for a couple of seasons and guides, anglers and operators are still learning about this fishery. The 2022 season is likely to be extended in order to capitalize on how productive the rainy season appears to be.

I have dates for 2022 season, feel free to contact if your are interested in going to Xingu. Caddisflyshop@gmail.com. 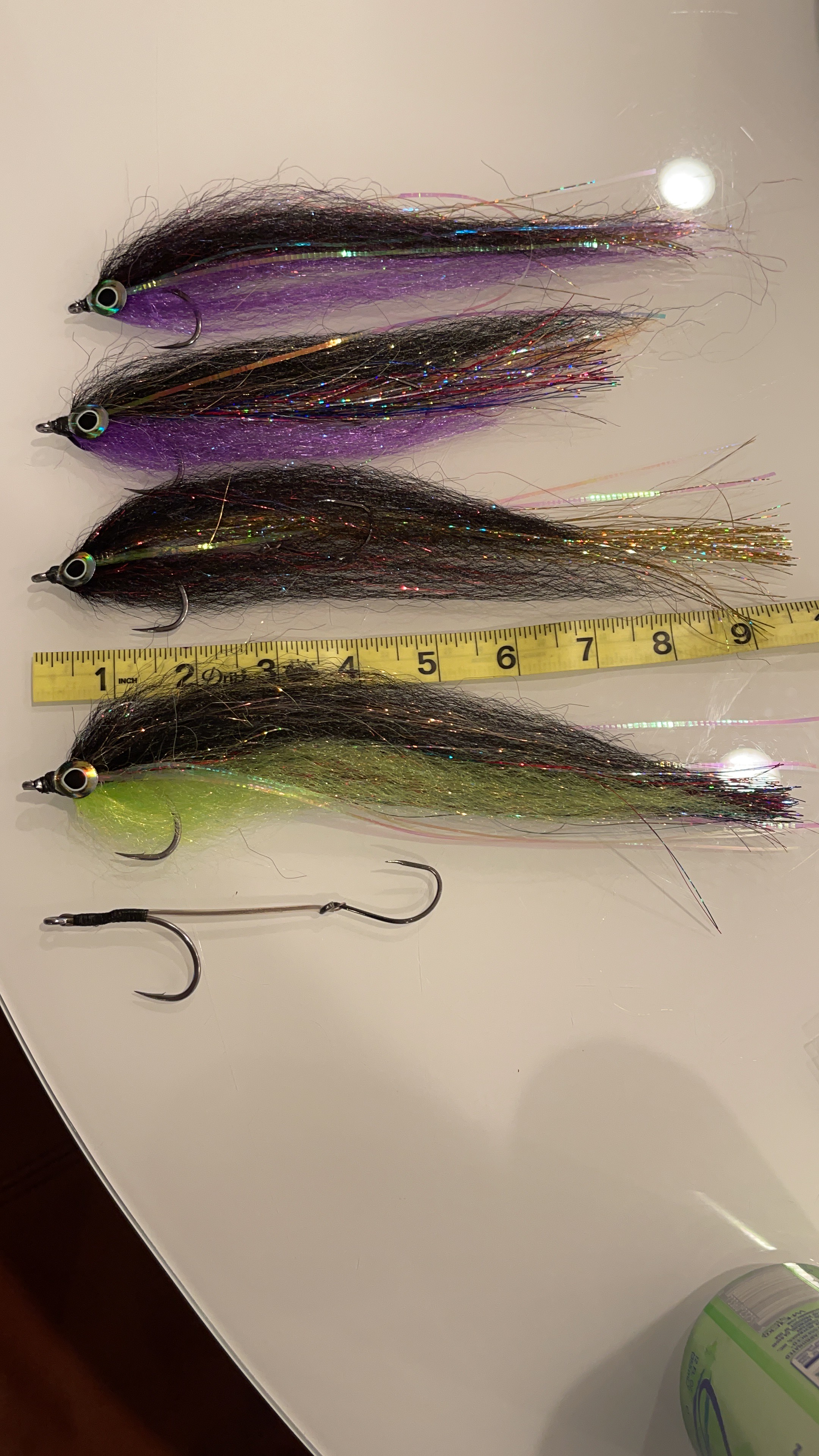 Payara have super tough mouths to go along with those wicked teeth. You need large double hooked flies for best results. I got some advice from Untamed Angling’s fly-tying guru Allan and guidance was perfect. We tied double hooked synthetic streamers with and without lead eyes using 4/0 Ahrex SA270 Bluewater Hooks as the first hook and Ahrex PR383 Barbless Predator Trailer Hooks as the trailer. I used 40lbs SA predator wire and shrink tubing to protect the connection. Our flies worked perfectly and I can’t say enough about the strength of the Ahrex hooks, they were absolutely perfect retaining their points, sharpness and strength fish after fish.

The Scott Sector saltwater rod was again the favored stick casting SA Custom Jungle Sinking Lines with ease and fighting fish with power from hook set to release. My G Loomis rep was kind enough to let us use 7 and 8wt NRX+ Swimfly Rods and these were great casting big streamers and poppers. The Swimfly series is light and has plenty of fish fighting power for the jungle. Another great performer and a rod that I really feel like was a super fish fighter was the Echo Prime in a 10wt. When a Payara bolted under the boat and the rod went full doubled over the prime was solid and gave way the least of all of our rods. Ideal rods ended up being 9wt’s but 8s and 10s came in handy as well.

Reels with smooth strong drag are important but fish rarely ran to deep into the backing. You needed to set the hook with power and stay on the fish with strength throughout the fight.