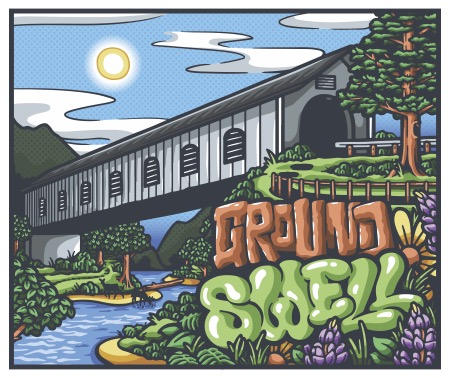 Raise a glass to recovery and resilience tomorrow, Wednesday, July 21st from 4:30pm-7:30pm at Claim 52’s Kitchen in downtown Eugene

Groundswell is a Northwest Pale Ale brewed to celebrate the McKenzie River – it’s clear, refreshing, river-forward and balanced with just enough salmon-safe hops for a crisp bite. Claim 52 Brewing created the base recipe and the artwork to share with other breweries to build a coalition of support for McKenzie River restoration. All proceeds from each brewery’s version of Groundswell will be donated to organizations working to protect their community’s watershed. Claim 52 will donate 100% of the beers proceeded to McKenzie River Trust.

The McKenzie River is Eugene’s only water source. Without it, the area’s breweries would be missing a vital ingredient to their beverages.

Claim 52 is creating a special beer that supports McKenzie River Trust’s efforts to restore the McKenzie River after the Holiday Farm Fire. The brewery is sharing the recipe with other breweries in town and hoping the fundraiser spreads to other breweries around Oregon — and beyond — who’d use the money for restoring their respective watersheds.

“The threat to water quality is a call to action,” says Claim 52 co-owner Jeannine Parisi, who also works at Eugene Water and Electric Board. “When you lose 170,000 acres of prime watershed to fire, it calls into question what we are going to do to make sure our habitat and watershed is healthy.”

Claim 52’s limited release beer is called Groundswell, which is a Northwest pale ale, Parisi says, meaning the malt is grown locally. The recipe is meant to be as crisp as the McKenzie River, she adds. The beer’s clean profile is a way to showcase the good water from the river. “It’s a good reminder to save our water,” she says.

Parisi says the idea for the campaign has been in the works for the past few months. The brewery felt the campaign was imperative because, like everyone else, it’s dependent on the McKenzie River since it’s Eugene’s only water source. And the beer’s can will honor the symbol of the river: the Belknap Covered Bridge. The brewery will donate all of the proceeds from Groundswell to McKenzie River Trust.

“What we like about the trust is they’ve got a great reputation and credibility with community and name recognition,” Parisi says. She refers to the group’s large-scale restoration efforts on the McKenzie River, which gives it a “green infrastructure.” That helps the water get cleaned in a natural way before flowing down to Eugene residents’ faucets and beer.

Although the Claim 52 fundraiser will go toward the greatest need for McKenzie River-related efforts, Ferguson says one way the money will help the nonprofit is through volunteer coordination, such as helping the Friends of Finn Rock Reach group. She says many of the volunteers in that group come from Blue River and are involved with planting trees, weeding and, more recently, cleaning up an old logging site.

“Whether we live upriver, midriver or downriver, this river connects us all,” Ferguson says. “It’s always taken care of us, and it’s our turn as a community to really step up and help to care for it.”

In 2020, Claim 52 participated in the Black Is Beautiful campaign, a fundraiser started by a Texas brewery during the Black Lives Matter-related protests. Claim 52 raised a total of $8,100, according to Parisi, and they donated $5,000 to the Eugene/Springfield NAACP and $3,100 to former San Francisco 49ers quarterback-turned-activist Colin Kaepernick’s Know Your Rights Camp.

Claim 52 plans to have the beer available for sale in July. And Parisi says that so far Oakshire has expressed interest in participating in the fundraiser, and she hopes the campaign becomes popular with other breweries.

“When you go up there, you can feel helpless,” she says of the McKenzie River area. “Every person can do just a little bit. It’s an accessible way to contribute. If we all buy a couple of beers, sending those funds up to the trust or other like minded groups can make a difference.”