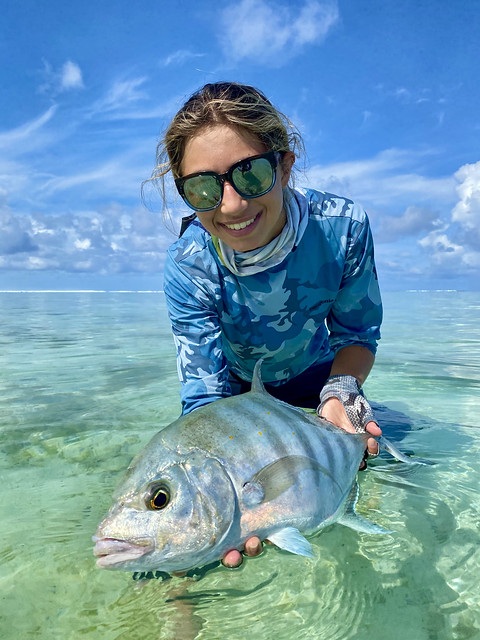 My family and I were extremely fortunate to lead a small group of anglers to Alphonse Island in the Seychelles this past April. Our week-long fishing adventure was outstanding. The Seychelles offers some of the most pristine marine habitat on the planet. Game fishes like Bonefish, Triggerfish, Giant Trevally, Bluefin Trevally, Golden Trevally, Queenfish, Sailfish, Tuna and many more thrive. Giant land tortoises, at least two species of turtle, tons of birds and dolphins are seen daily. Alphonse is a beautiful island paradise perfectly manicured daily by the large staff of Alphonse Fishing Company employees and IDC (Seychelles International Development Company). The accommodations are fantastic, the service level is as high as any fishing destination that I have experienced. The Seychelles is a bucket list trip for sure, anglers and visitors of all types will not be disappointed. 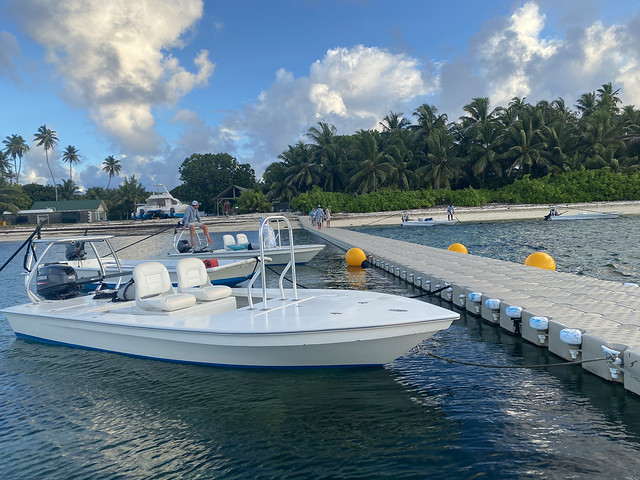 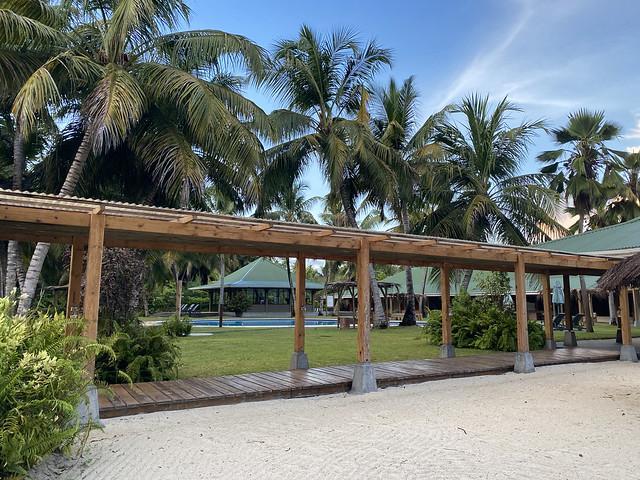 Each morning anglers depart from Alphonse Island and run top quality flats skiffs across a deep channel towards St Francois Island. On the way, depending upon the tide you can fly fish for numerous species. The main five species that guides and anglers target are Bonefish, Triggerfish, Giant Trevally, Indo Permit, and Milkfish. Bonefish are by far the most available and cooperative of all the species. The numbers of bonefish are incredible. Our week was an ebb tide and there were bonefish everywhere. The guides said a spring tide brought even more fish to the flats. Bonefish seemed to be available at all times of the day, and at any tide. 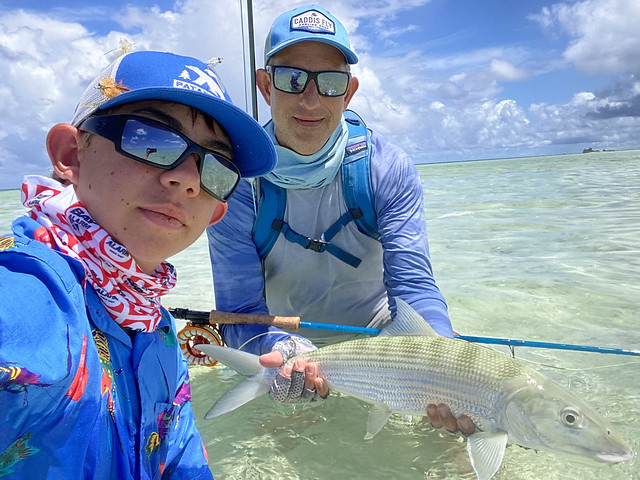 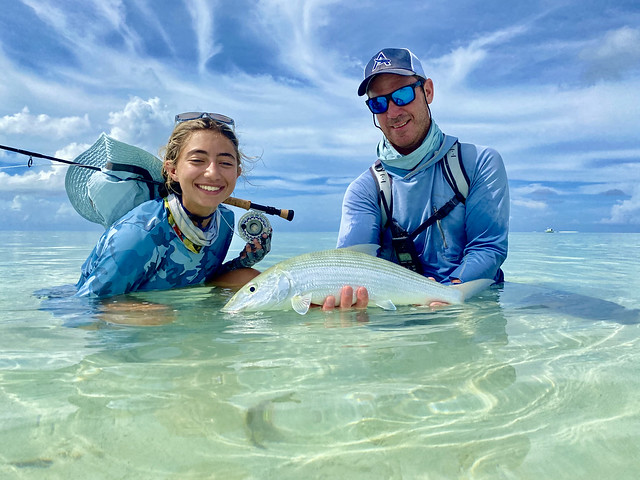 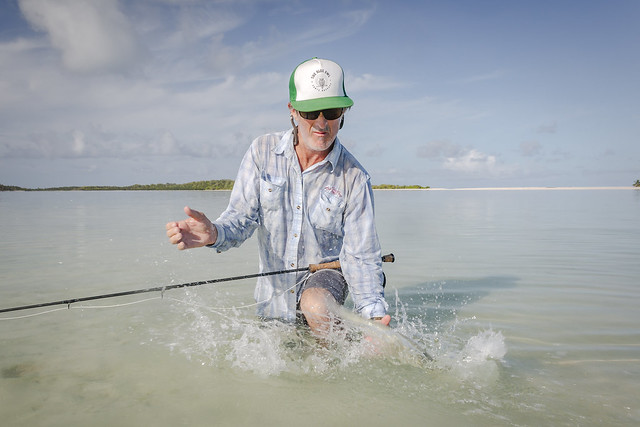 Triggerfish are a fascinating fish that none of our group had ever targeted. They’re spooky, finicky eaters that are tricky to hook and keep on. After you hook them they immediately run into a hole or off a finger flat into a coral head. You need to “hold” them and minimize the run in most instances. Casting has to be super precise and even with the perfect cast they often spook or ignore the fly. Triggers occupy shallow “reefy” water and guides like to target them when the tide was not moving too much. 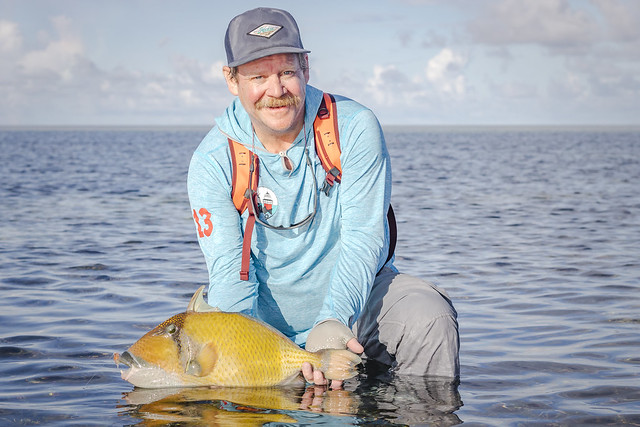 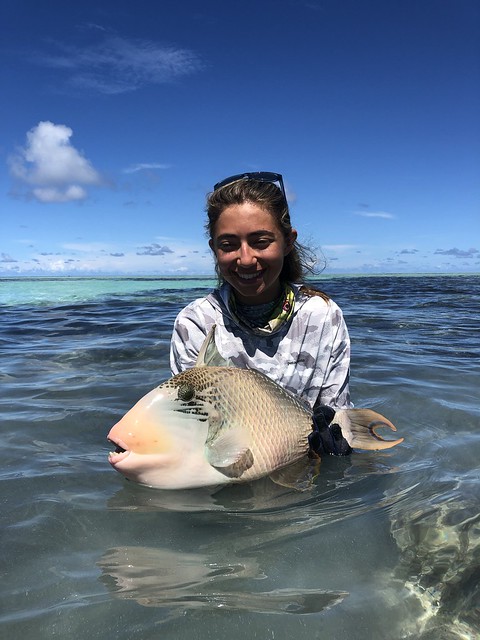 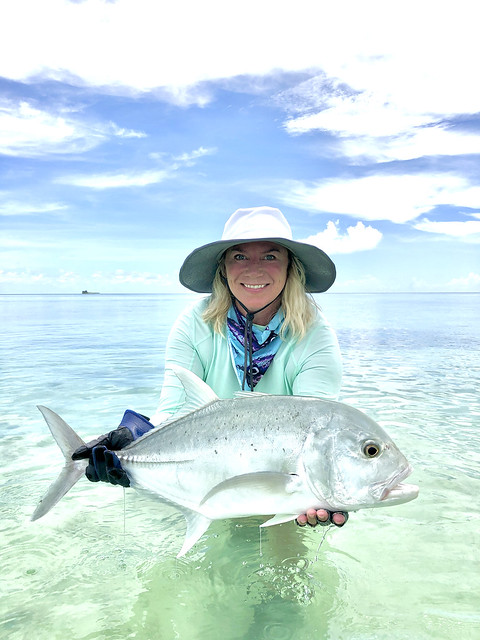 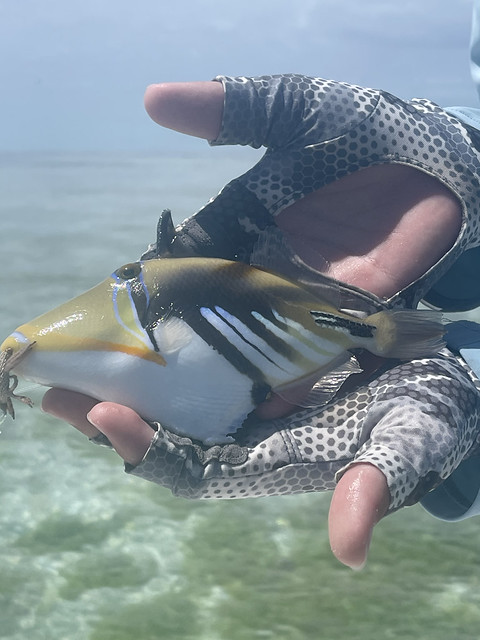 Giant Trevally are the marauders of the flats. GT’s can show up at any time chasing bait, cruising along near a ray or a shark or on the protective reef east and west of Alphonse and St. Francois Islands. Our week did not see big numbers of GT’s but they were around for sure and once a GT has decided to grab your fly you can’t keep it away from them. 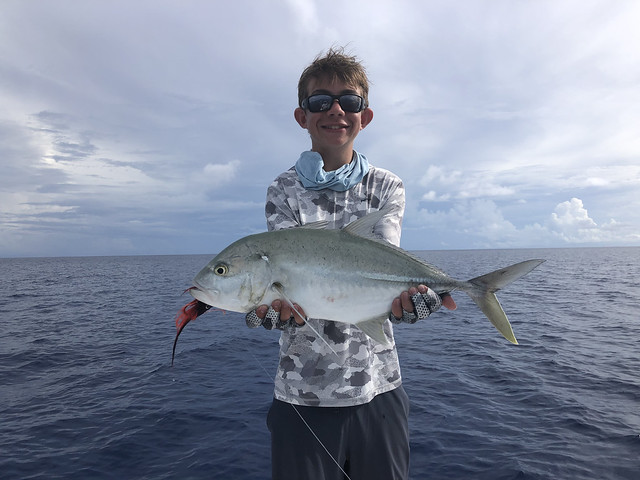 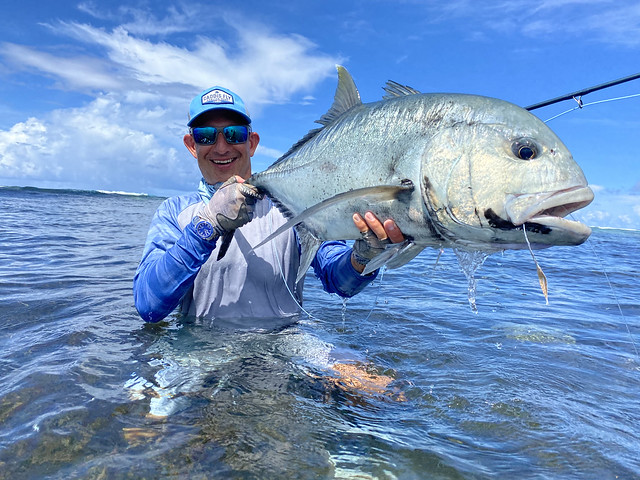 We saw quite a few Permit over the week, but none really in ideal situations feeding on the flats or on top of rays. The Indo Permit has a really cool look to it but like all permit are hard to find and even harder to catch.

Milkfish were everywhere and our group hooked a couple of them. The algae eating monster bonefish looking Milkfish cruises the flats and has a reputation as one of the toughest fishes that swims. Lacking the lactic acid build up during the fight, they rip line and pull and pull and pull. Ideally you find these fish on the surface feeding like carp in deep water. All things need to line up perfect to actually get a Milkfish in the mouth and then hang on.

There are a ton of other fun species to catch and not necessarily target, Batfish, Emperor Fish species, Pompono, smaller Golden and Bluefin Trevally are everywhere. 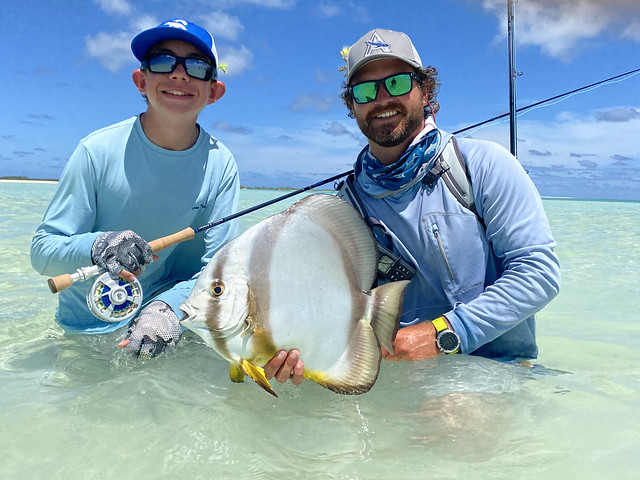 Bluewater fishing is also available at Alphonse and we experienced a half day morning trip. From the same marina as the flats skiffs an offshore boat took us just outside the reef surrounding Alphonse Island (two minute run) and we were into Tuna and Sailfish right away. Wahoo also came to teasers but didn’t stick around long enough to eat our flies like the Sails. Cash was lucky enough on our Bluewater day to have a “Bills and Bones” slam. Billfish on the fly in the Bluewater and a bonefish ( or 10) on the flats in the afternoon. 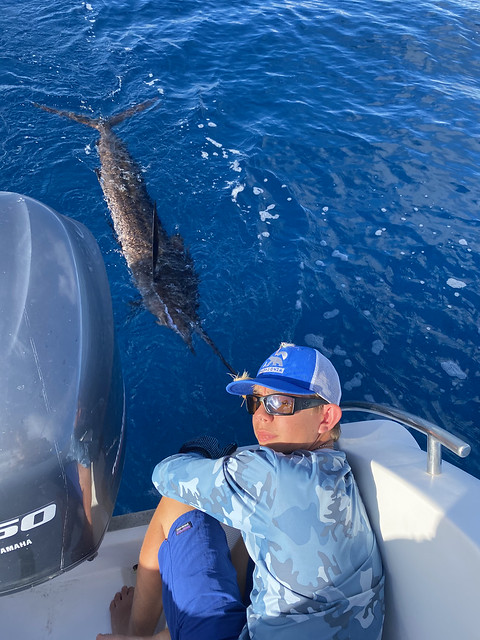 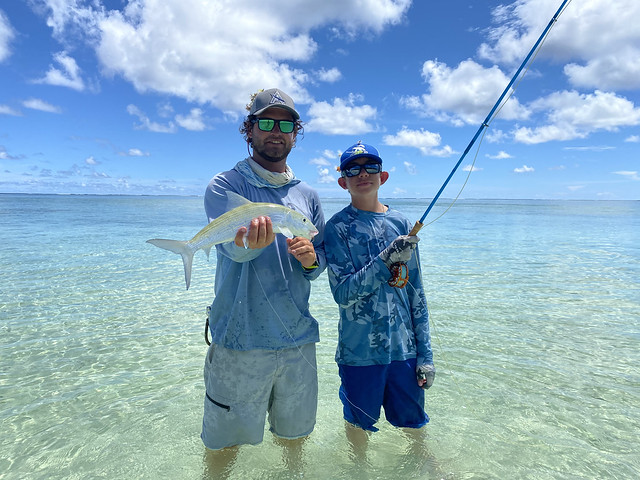 The fishing schedule at Alphonse: each morning we rode our bicycles a few minutes from our beachside bungalows to the restaurant where breakfast was served at 6am. From there we rode to the fishing center/fly shop. Fishing days were 7am start and 4-4:30pm finish. Upon return to the marina you can clean and leave all your gear for the next day. If you are missing anything, broke anything, or just want to check out specific flies the guides have developed, the Alphonse fly shop has everything one could need. Gear loan is available as well. 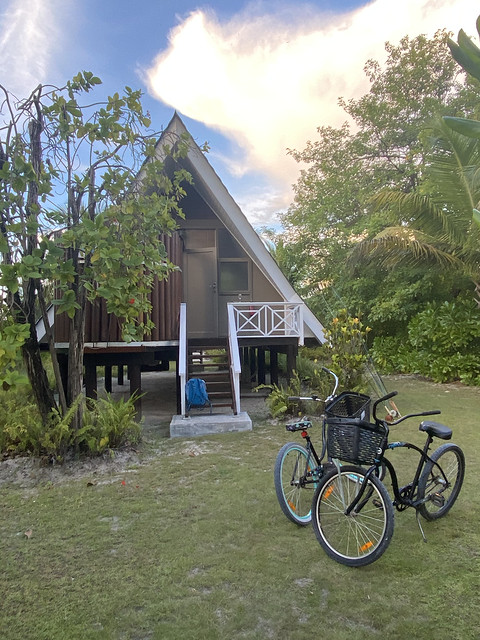 A beautiful beachside bar awaits each evening and after a hot day in the equatorial sun. A fresh chilled coconut with a straw is a great way to start. The bar is fully stocked and Ajit and Abe where fun guys who took great care of our crew. Appetizers and snacks where served prior to a wonderful dinner each night often consisting of fresh fish, ceviche, sashimi, grilled fish, salads sides, deserts and more. We had outstanding al acarte dinner services and beachside buffets where you could customize your meal. Alphonse has a massive garden and fresh fruits and veggies accompany all meals. If a person had dietary specificities they were met with ease by the incredibly attentive staff diverse and plentiful menu options. The fresh seafood was phenomenal, Wahoo, Rosy Jobfish, and Tuna were served in some form almost every night. 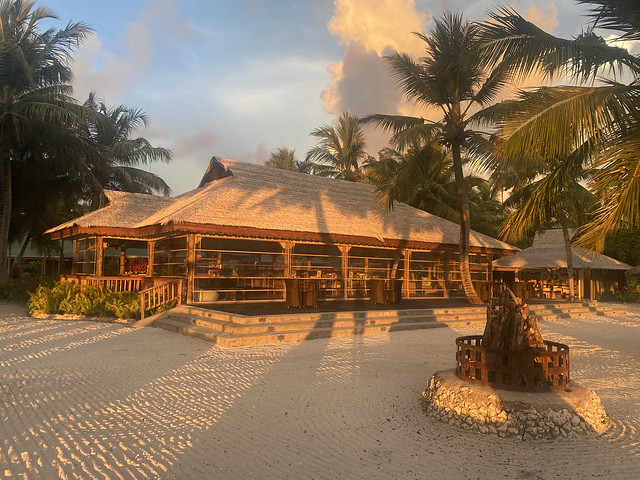 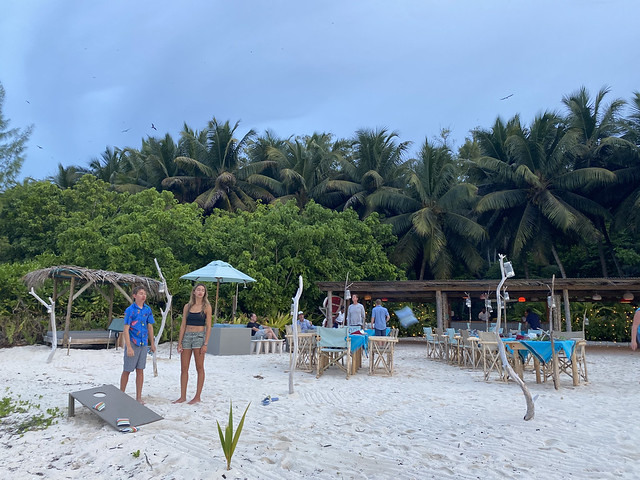 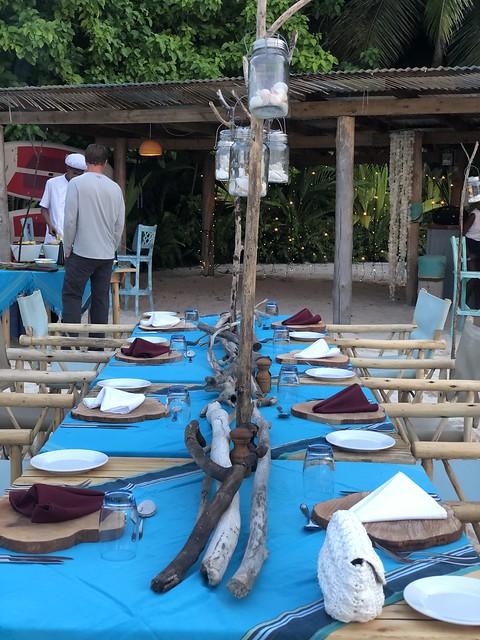 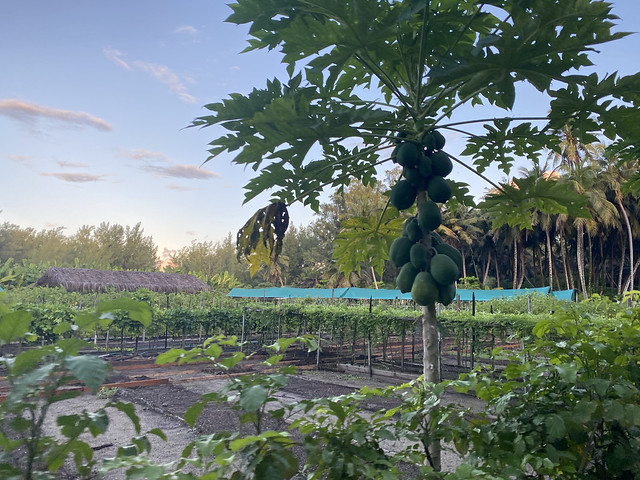 The Seychelles are a beautiful part of the world and offer incredible saltwater fly fishing in a pristine setting. I feel very lucky to have visited and look forward to returning. The Caddis Fly will be hosting more trips in the near future. Contact me at caddisflyshop@gmail.com for details or if I can help you with an upcoming trip. 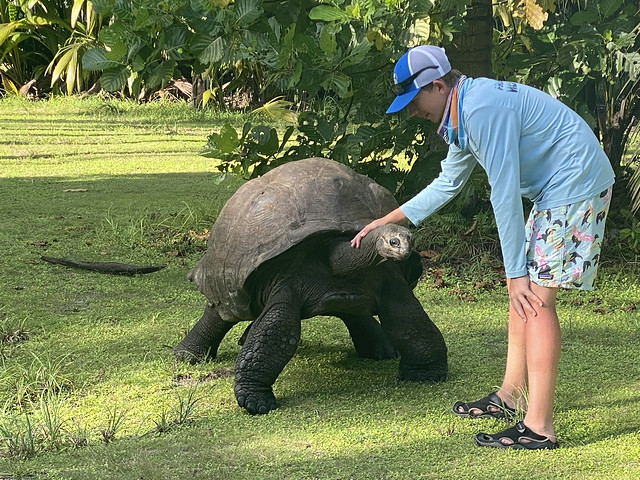 Tackle Notes and post trip thoughts on tackle: I continue to love my Echo Bad Ass Glass 8wt, it was awesome on the bonefish. Beulah loaned me a 10 and 12wt in the OPAL series and having the foregrip was really handy for sailfish and GT’s. The OPAL rods are really tough and cast well, I pretty much tried to break one on a milkfish in an attempt to shorten the battle but the rod took the bend no issues. We used Nautilus CCFX-2 Reels that performed perfectly, as did Nautilus XL series. I got a chance to use Shilton Reels that I brought and Shilton Reels that the lodge loans. Shilton is the reel that Alphonse stocks and loans and feels it’s the finest reel out there to handle the tough conditions of the saltwater species they chase. The Shilton’s were flawless on Billfish, GT’s and more. Thomas and Thomas’s new Sextant was excellent in an 8wt and 12wt, fast action stronger than previous T&T salt specific models. Our favorite rod overall for “castability” remains the Scott Sector, the Sector is just lighter and smoother than any other saltwater stick out there, I had an 8,10,12 with me. The Loomis NRX+ is a super-fast rod and in wind performed very well in a 9ft 8wt. RIO’s new Elite Bonefish, Elite GT, and Elite Permit lines were awesome and to hear the guides enthusiasm for them was great. The lines remained slick and few “tangles on the bow” were experienced. 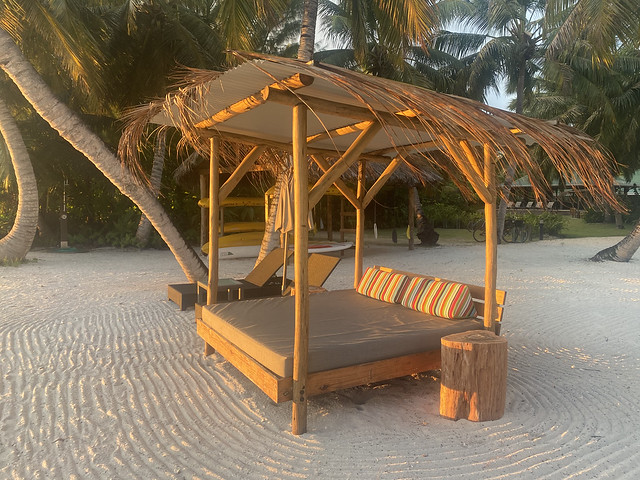 Fortunately, I had lunch with Bruce Berry (our Montana Fly Co. sales Rep) a few days before departure and he hooked me up with his favorite versions of Christmas Island Specials. By far the best performing bonefish flies were very sparse, simple lead eyed patterns, no legs, not much flash. You need a wide range of tippet and the guides basically build saltwater leaders to the specific species targeted, I did not bring 30lbs but the guides wanted it for sure. They have material but one should really bring 16, 20,25,30,80 and 100lbs tippet and you don’t need tapered leaders at all. I used RIO Saltwater Fluoroflex and had zero issues. Bringing a few gigantic poppers on 6/0 or 8/0 hooks is advisable, and small crab pattern as well. 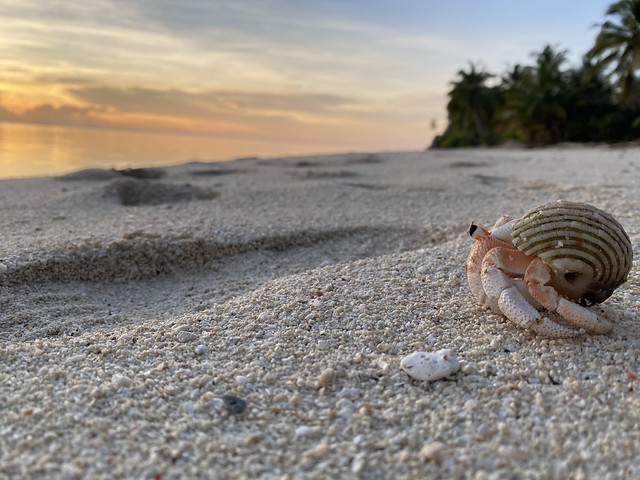