Forgive me Father for I have sinned (again)

I had to share this epic tale from my kiwi pal Nick Johnson. Nick guided for Cedar Lodge the six seasons we owned it and we have always enjoyed his colorful commentaries. While the September “canal” fishery in NZ’s central South Island may raise some ethical questions, it pretty interesting. 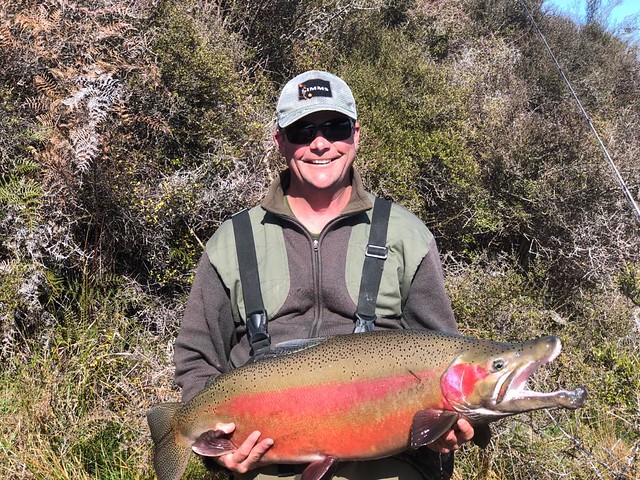 Hope you are well and planning to emigrate soon before the end of the American Experiment! Again, this is not why I write you, rather to share yet another tail from the dark side. So yesterday I find myself at the ‘Measuring’ Pool on the mighty Spot X River with my trusty sidekick Jimmy The Fish, Peteski being up north and unavailable. Jimmys up first and first cast with the braided spinning gear he’s into a beautiful 16lb Hen, Three casts and twenty minutes later he lands a 27lb Jack that is just a beast. I’m tempted to have a go with his rig as he seems to be getting a better resistance free drift in the deep slow tailout across the shoal of hogs that we can just make out when the wind isn’t rippling the surface, the back casts tricky and he’s making it look easy. But no, being the purist I am I persevere and make a couple of adjustments to my set up including succumbing to putting an indicator on. I get the nicest of casts out with this cumbersome rig, just above the Matagouri and Toi Toi flower heads and watch intently as the woollen tuft dead drifts over the biomass beneath it. It stops momentarily before disappearing oh so delicately below the surface to be replaced by huge slab of silver and pink as a fiesty 11lb Hen erupts on the surface and tears across the pool! 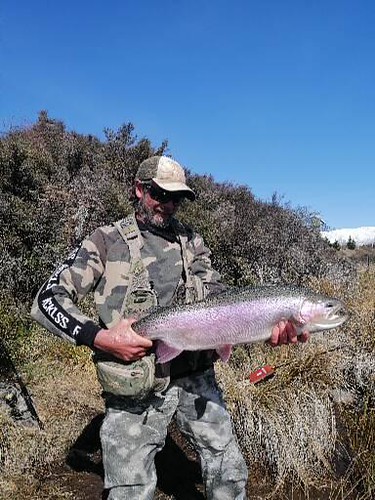 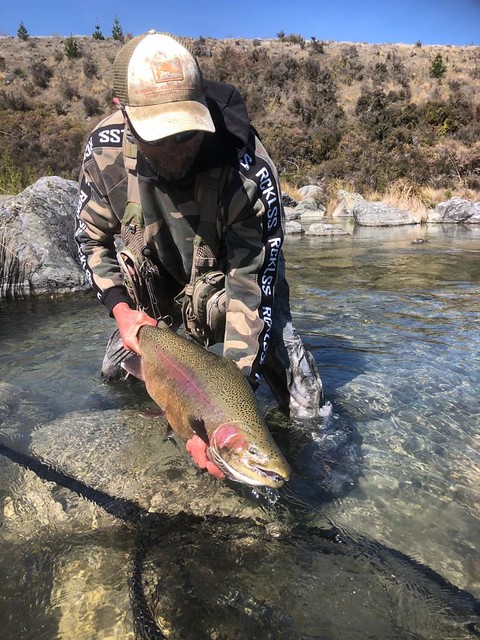 We head down to the bouldery tailout proper and wade out to a couple of dry rocks, what we see will remain with me for as long as recreational drug and alcohol overuse will allow! Between three and eight absolute horses vying for affection and position in and around the boulders of the swift flowing rapids in three feet of water. I insist on first shot even though it’s technically Jimmys go, I’m coming off a Treble Cone season where a me first mentality is the only way to get through the que, I’m going to hell anyway, my shot Jimmy (ya peasant) I can see three fish in a small bucket on the other side of a submerged rock that makes for tricky mending and a worse drift. Anything hooked that decides to turn and run down through the rapids below is sianara, I’m in my element, I’m in the “zone”! ( I’m goddamned Brad Pitt in A River Runs Through It, sans the good teeth and square jaw!) The casts a good one and the smallest of the three swings left and …liift! I’ts mayhem as it tears around boulders and snags before roaring off …downstream, with Jimmy in hot pursuit, slipping and sliding, filling his waders. He’s got one shot, the rods arched, the knots hold,(don’t go there) and unbelievably the fish is now thrashing around in his oversized net! I’m thinking Peteki who? as we haul to the side of the river and safety. Ghillie par excellence! 11lb, the small one! 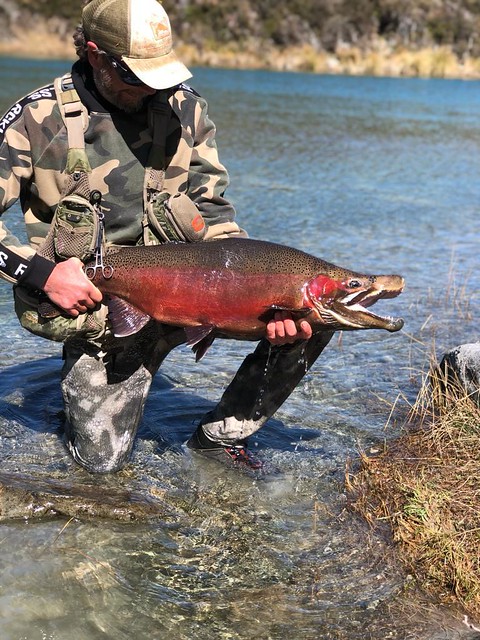 Jimmys go and within a couple of minutes he’s bought a chunky little six pounder to the net. I’m up again and it’s tricky, they’re pretty rarked up and we decide to cross and wander up the other side, last cast into the pocket again and one of the remaining Hoggs swings and,,,yep I’m on! Tank, doesnt even register he’s been hooked for a couple of minutes, no shit, just keeps chasing other fish around! I stay fairly soft on him as I get to the other side to try and avoid him running downstream. Ten minutes later He’s in the net and at 20lb an equal pb for this river anyway.
90lb of fish to the net in a couple of hours, 15lb average! Stuntfishing I know but incredible nonetheless.
The End.
Hope you enjoyed, take care Americano,