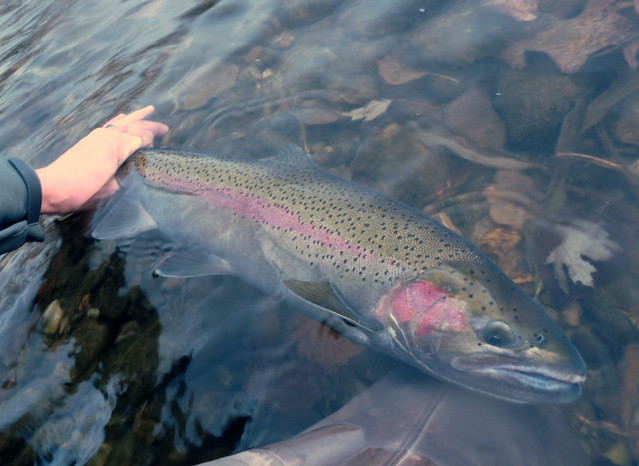 Facing warming water in the Columbia, rising above 68F each year in early July, migrating wild salmon and steelhead move into very specific cold-water areas in order to avoid the physical stresses created by warm water and conserve energy for their migration and spawning once reaching their natal rivers.

The OR Commission’s action in establishing sanctuary areas where ESA-listed salmonids are protected from angling encounters while they take up residence in cold water refugia, will provide migratory survival benefits for wild steelhead returning to dozens of home water tributaries.

The US Environmental Protection Agency (EPA) was required to review the impact of water temperatures on wild fish migration in the Columbia River as part of a legal settlement in a Clean Water Act lawsuit. The long-delayed EPA Draft CWR Report identified 191 water sources entering the Columbia mainstem between the Columbia River mouth and the Snake River. Thirty-five were warmer than the Columbia in July and August. However, EPA’s research and prioritization found twenty-three (23) significant cold water refugia areas below the Snake River confluence. Based on refined analysis on how wild salmon and steelhead used the CWR, EPA identified twelve (12) of these refugia as critical to wild salmon and steelhead migratory survival.

Historic water temperature measurement data at Bonneville Dam indicate that the total warming of the river since the late 1930s in August (on average) is approximately 3.6F, rising from below 68F to near 71.6F.

EPA found that the presence, distribution, and water temperatures in the CWR within the Columbia River provide an advantage to migrating steelhead and salmon in terms of energy savings required to complete their migration, pre- spawn staging and spawning. However, when the migration success of steelhead that used CWR versus those that did not use CWR was evaluated, that study found that migration success to spawning tributaries for those steelhead (wild and hatchery) using CWR was about 8% less than steelhead that did not use CWR. This initially suggests CWR use is not beneficial.

However, the study also indicated that fishing pressure within CWR explained the decreased survival as wild steelhead using CWR, which must be released when caught, experienced a 4.5% decrease in survival during migration to their spawning tributaries compared to wild steelhead that did not use CWR.

The increased mortality is likely associated with catch and release mortality as well as incidental catch of wild steelhead in tribal harvest fisheries.

The fishing pressure within CWR makes it difficult to directly measure the benefits of CWR to migrating adult salmon and steelhead.

Exceptionally low wild steelhead returns since 2016 necessitate deep evaluations of angling impacts on migrating wild steelhead using the CWR. The OR Commission action establishing no fishing sanctuaries are aimed to reduce the rate of wild steelhead encounters from fisheries (both indirect and direct) that have impacts on salmonid fitness, survival, and productivity.

The three Thermal Angling Sanctuaries are at Eagle Creek, Herman Creek and the very lower Deschutes River and a portion of the Columbia River that is cooled by the Deschutes colder waters.

The Conservation Angler has advocated for these conservation measures along the Columbia since 2016 and supports the OR Commission’s adoption of these protective measures. The Washington Commission must take them up as well.

I. Areas where cold or cooler waters create vitally critical thermal gradients in the concurrently managed Columbia River are well known, identifiable and recognizable to the angling public.

III. Steelhead using thermal gradients are vulnerable to multiple fishing-related encounters based on extensive and extended residencies within cold water refugia that deplete stored energy reserves and these circumstances begin when the Columbia River reaches 68F which happens, on average, by July 10 and lasts until September 25.

a. Scientific References:
Palmer, John, et al. Environmental Protection Agency, Columbia River Cold Water Refuges Draft Plan October 2019
IV. Existing Oregon Administrative Rules already identify “sanctuaries” where commercial fishing is not permitted, and these areas are well-defined and well understood by the public. (ORS 635-042-0005).
V. Oregon does not have river-specific management regimes to accurately estimate or secure river-specific abundance for wild steelhead. There is no plan to establish goals or monitor attainment so spawning escapement and egg deposition criteria are set and met for every natal wild steelhead stream.
VI. ODFW (as well as other state and Federal agencies) must make it a Departmental Priority to work with all land and resource managers and owners to ensure that the cold water sources are managed, protected and enhanced so that the array of CWR in the Columbia River remains a critical advantage for migratory survival of returning wild salmon and steelhead. Protecting the wild fish using the CWR is only the first step in increasing migration survival in the Columbia River – protecting the sources of this cold water must happen.
VII. The OR Commission, having shown leadership in providing a measure of protection to wild steelhead during their migration to natal rivers by establishing sanctuaries from angling in areas of thermal refugia, in specifically defined areas and under certain environmental conditions in Oregon, must encourage and lead the Washington Commission to undertake the same measures in seven tributaries and in concurrent waters. These include the Kalama, Cowlitz, Lewis, Wind, Little and Big White Salmon and Klickitat Rivers.

Contact: David A. Moskowitz, The Conservation Angler @ 971-235-8953 (direct) or via theconservationangler@gmail.com