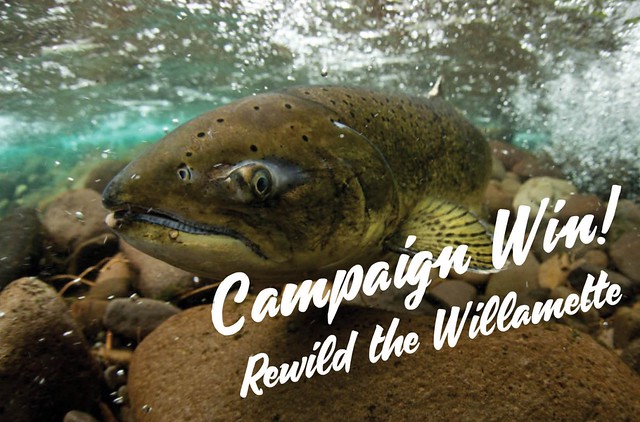 From The Native Fish Society

Court finds Army Corps’ dam operations harm salmon and violate the Endangered Species Act
We are excited to share a big win for Oregon’s Willamette Basin and its wild fish!

Today, Chief Judge Hernandez of the District of Oregon ruled in favor of Upper Willamette River wild spring Chinook salmon and winter steelhead, finding that the U.S. Army Corps of Engineers (Corps) and National Marine Fisheries Service (NMFS) failed to take necessary steps to ensure the survival and recovery of these iconic fish in violation of the Endangered Species Act (ESA).

Native Fish Society along with our partners at Northwest Environmental Defense Center and WildEarth Guardians, represented by attorneys at Advocates for the West, filed suit in 2018 asking the court to compel the Corps to make immediate operational adjustments to the federally-owned and operated dams to save these important fish. We were alarmed by the rapidly dwindling numbers of salmon and steelhead and the ongoing delays in action by the Corps. The court today ruled in favor on all of our claims.

The Court ruled favorable for us on all three of our ESA claims, holding that the Corps: 1) failed to carry out “several of the most important [required] measures” related to fish passage and water quality, 2) is jeopardizing and unlawfully taking Upper Willamette Chinook salmon and steelhead, and 3) the agency’s significant delay in reinitiating consultation was “a substantial procedural violation of the ESA.”

“The Corps has known for more than a decade what must be done to save these fish, but they have failed to act,” says Jonah Sandford, staff attorney for the Northwest Environmental Defense Center. “The Court confirmed that the Corps has simply failed to take necessary actions related to fish passage, flows, and water quality, and that these failures are causing further harm to these iconic Oregon species.”

Importantly, the Court found that “Plaintiffs have shown the Corps’ operation of the [Willamette Valley Project] without completing the [required] measures is causing the species’ decline.” Further, the Court found that “it is undisputed that significant measures were never carried out, some were delayed, some have not yet occurred, and some will not occur in time to meet future deadlines. Meanwhile, [Upper Willamette River] Chinook and steelhead populations continue to decline, although both species remain listed as ‘threatened’ after a 2016 NMFS status review.”

“Over a decade ago, the Corps agreed to complete numerous actions to recover wild Chinook salmon and steelhead but since then has dodged, skipped, and delayed at every turn and squandered precious time and resources ” says Marlies Wierenga, Pacific Northwest Conservation Manager, WildEarth Guardians. “The Court confirmed what was known all along – fish passage is vital to saving Oregonians’ culturally important wild fish and the pulse of a living river.”

“It’s time to get the Willamette River and its wild fish back on the road to recovery,” says Jennifer Fairbrother, Conservation Director for the Native Fish Society. “This ruling acknowledges the federal government’s obligation to revive abundant, wild fish. We look forward to the day when we have a Willamette River that supports healthy, self-sustaining, and harvestable populations of wild salmon and steelhead”

The Court ordered the parties to submit a briefing schedule within fourteen days to determine the appropriate remedy to the violations.