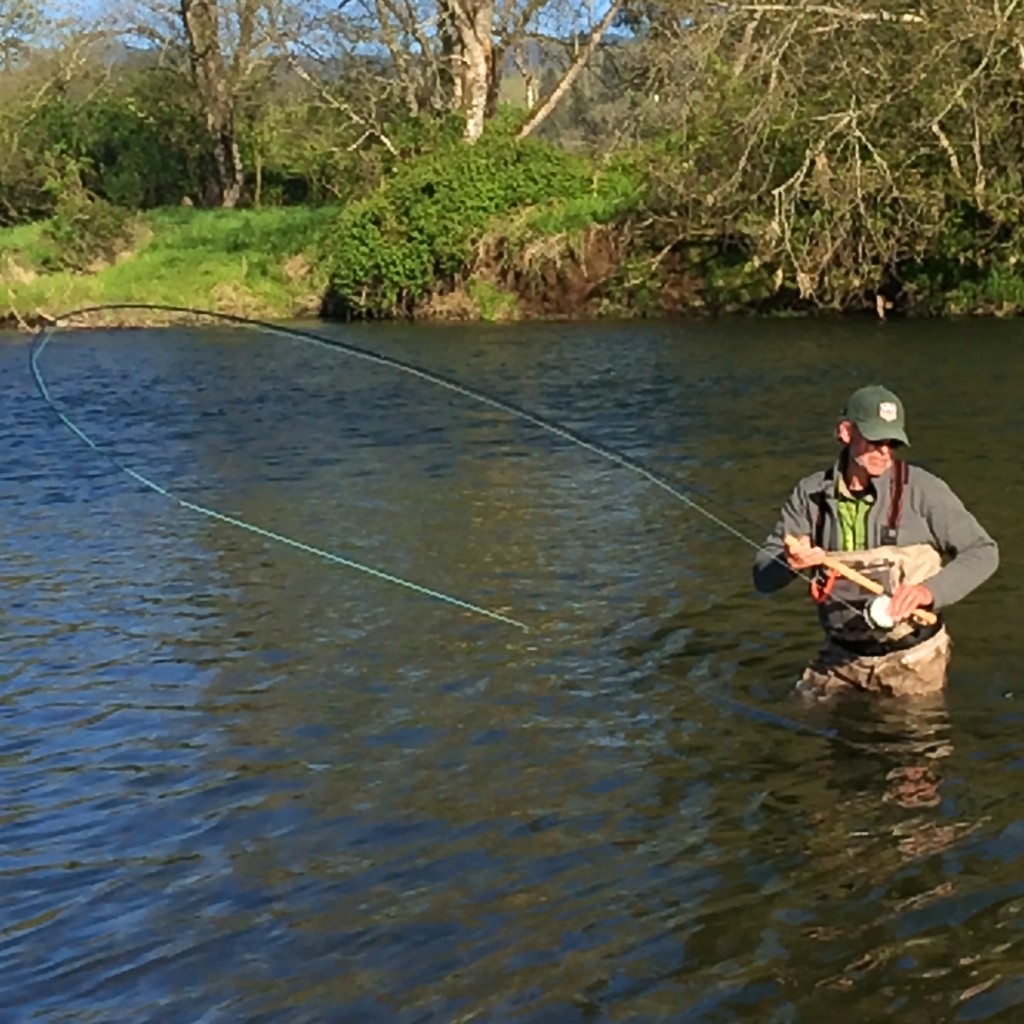 Author’s Note: I wrote this here article for your entertainment, and perhaps to offer food for thought. I make no claim regarding the veracity of numbers, logic, scientific accuracy, or commonsense. Since I am, at heart, and angler by genetic predisposition, you should know this already.

On a perfect sunny morning in April, I’d rather be fishing. I’d rather be drifting down the Nestucca or a half dozen other Oregon Rivers, but the Covid-19 pandemic is upon us, as is social distancing, so I will not be fishing this morning, and not tomorrow either.

While some folks are agonizing, tumbled ‘round and ‘round in the emotional cement-mixer of stay-go, go-stay, what-do-the rules-say, how can I get around the rules, who’s-to-stop-me, I’m an American so it’s my right, and so on, I got to thinking what the stay-home order means to the fish.

Yep. I tried putting the steelhead first, and the revelation was stunning.

My absence from the river might have allowed, hummmmmm, about a dozen steelhead to avoid getting a hook in their snoot, given that I would have averaged a fish every three days. If you give me a more generous average, my absence might have let two dozen steelhead run up the river without one of my hooks being stuck in the corner of its mouth, the roof of its mouth, in its gill rakers, or down its throat.

If ten or twenty percent of the un-harassed fish I let swim unimpeded up-river didn’t die because I’ve been off the river, that means the spawning population just went up by one or two steelhead.

Not much, but it’s not a bad thing.

However,  I was but one among thousands of stuck-at-home anglers, so voila, the steelhead saw a lot fewer dangerous little trinkets and enticing yummy things to eat and explore and otherwise pounce upon and inhale.

Thousands stayed home during what is possibly one of the hottest months of the winter steelhead season on the Siuslaw, Alsea, South fork of the Coquille, and Umpqua ….. I bet you get the point of where my thinking is going by now.

So while this stay-at-home has been a drag for us anglers, it has been one heck of a welcome respite for the steelhead, the cutthroat, to a lesser degree for the spring chinook.

At first blush, this seemed like a move of potential conservation merit, of possible benefit to wild steelhead. Of course, it also meant a zillion dollars revenue evaporated, jobs lost, spirits crushed, and perhaps working families in ruins.

But if I set the economic and human consequences to the side, the shut-down might have helped the steelhead a little, and as angler/conservationists, this would normally be cause for celebration.

But then another thought hit me in the face like a crisp, sharp edged brick.

This new perspective came at me from an email string left in my path like a trail of bread crumbs. One fellow cited a recent study finding that 60+ percent of Puget Sound smolts get eaten by harbor seals.

Ooooooops. What’s the point of producing more wild (or hatchery smolts) if they get eaten by seals?

But the predation might be “normal,” came the retort in email trail, and besides, what about the cormorants, pollution, water withdrawals, habitat simplification, and habitat degradation, and fish-farms that are filthy with sea lice– the scenario exploded what little grey matter I had left under my Simms ball cap.

I yielded to the complexity then, puked on my fly tying bench, and went back to learning Tai Chi to soothe my daily bout with virus anxiety

My takeaway.
The steelhead’s world is a complicated place, just as our world is. Everything is connected. When someone comes along predicting the effect of this or that action, its difficult to know if they are competently knowledge-of and accurately taking into account all the variables. Who among us really is? We have our own narrow set of beliefs and bias, and that is our frame of reference.

What is certain is this. Anglers, as passionate a gaggle of people as you will ever see, are already divided over issues like
*hatchery versus wild,
*bait versus flies,
*catch-and-kill versus catch-and-release,
*among others.

Being divided, we are ripe for losing what little control we might have over the fish, rivers, and wild lands we love

We anglers are prone to rather quickly setting upon each other, to the amusement of the, the polluters, water users, golf course developers, McMansion brokers, and so on.

We need to stand together, united by our love for fishing, clean rivers, public access to places where we and our families can experience a little, at least, of what was common in the 1950s, 60s, and 70s. That’s not asking for too much, really, is it?

I think it is not.

If you are a member of an advocacy group, ask your fellow members to make friends with members of other advocacy groups. You know the kind of groups. I’m talking about.

My group can’t work with those people.

We don’t need them.

Fine, go home to your own corner and sulk. File your lawsuits and lobby your legislator friends.

Gotta go now. Got some flies to tie, leaders to stuff into leader wallets, and maybe a few yarnies to tie.

It’s gonna be time to fish any day now.