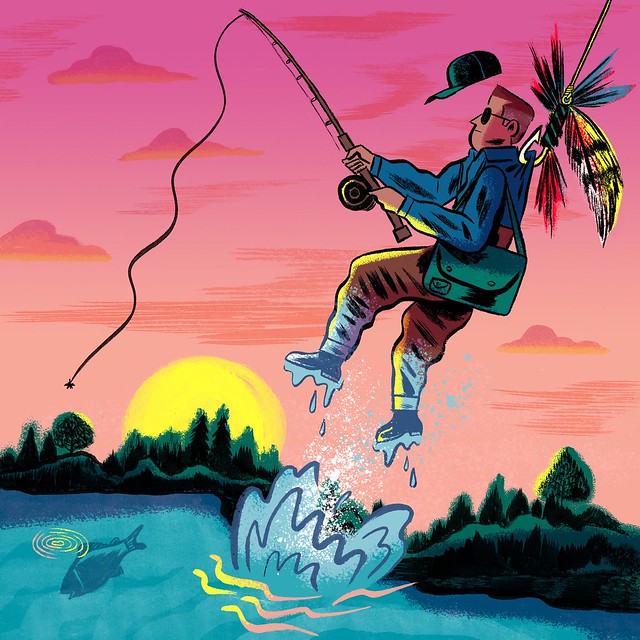 A Friend Shared this article with me from the New York Times. Enjoy!

I can’t wait for social distancing to end, so I can be alone again.

By Matt Labash
Mr. Labash is the author of “Fly Fishing With Darth Vader.”

In this endless war against Covid-19, I have tried to be a dutiful soldier. I’ve mostly stayed home to binge-watch and binge-eat (bad news and Fig Newtons, respectively). I’ve yet to poleax any octogenarians as they dive-tackle the last pack of Cottonelle. I only sneeze on immediate family. I’m a regular Audie Murphy.

But even we stoical war-hero types have our breaking point, and I’ve reached mine. My governor, Larry Hogan, banned recreational fishing in his recent stay-at-home order, intended to halt the spread of the coronavirus.

As a proud citizen (now, inmate) of Maryland, once un-ironically nicknamed the “Free State,” I’ve always liked Mr. Hogan. He’s stout and feisty, more workhorse than show pony. He hates many of the same things I do, like high taxes and Pennsylvania (whose tributaries pollute our Chesapeake Bay). He’s that filthiest of words in the modern Republican Party — a centrist. I’ve voted for him twice.

But now I’m rethinking my drink. In early days, when Mr. Hogan started closing schools and “nonessential” businesses, we avid fly fishermen thought our biggest problem would be our parks and rivers getting overrun by newbies, many of whom hadn’t seen sunlight in years. Stir-Crazy Nation now had nowhere else to go (including to jobs, now being eliminated at alarming speed).

A clueless dad, out for a walk with the family, skipped rocks across my fishing buddy’s favorite brown-trout hole as he was trying to fish it, unaware of river etiquette. At one of my go-to bass spots, I witnessed a roving band of bored teenagers throwing rocks at geese across the pond. They came nowhere near hitting them — the noodle-armed delinquents probably hadn’t lifted anything heavier than a PlayStation controller since seventh grade. Still, I couldn’t wait for all this “social distancing” to end, so I could be alone again.

But at least we had fishing. Or did. On March 30, the governor issued a confusing edict. While still allowing “outdoor exercise recreation” such as hiking, running and biking, he banned everything but “essential” activities. For most fishermen, fishing regularly is essential for mental health — more useful than therapy, Zoloft and even bourbon whiskey.

With much confusion over whether fishing was banned, Maryland’s Department of Natural Resources offered clarification: Those “who fish as a matter of sustenance” could still fish, but in all cases “catch-and-release fishing is strictly prohibited anywhere in Maryland.”

The coronavirus, apparently, isn’t the only epidemiological disaster. As Yossarian said in “Catch-22,” “Insanity is contagious.”

Never mind that most fly fishers, nearly all catch-and-releasers, need at least 50 feet of space to ply their craft, 7.3 times beyond social-distancing guidelines, unless they want to bury a zug bug in someone’s cornea on the backcast.

Never mind that the Environmental Protection Agency has relaxed enforcement standards during the crisis, so that it is now more lawful in Maryland for a petroleum company to dump pollutants in a river than it is for me to stand in one and catch a fish without killing it.

What made me snap was when the Department of Natural Resources stipulated that charter boats could still go out, as long as they were fishing for food and kept it to fewer than 10 people.

I frequently see these crowded boats zip by me while striper-fishing the jetties of the Chesapeake. And while I don’t begrudge a skipper making a living, just picturing their pink-faced sports floating by on a party barge, listening to bad bro-country while downing Fireball shots, as the boat catches their fish while trolling … well, that was just too much.

So, I did what I always do when the world stops making sense — went fishing.

I grabbed my trusty six-weight and my sentimental-favorite vest, which now has more holes than pockets, though I can’t seem to throw it away. I went to a nearby farm pond, half-scummed over with algae, but which is so tucked away, I drove by it for 15 years without knowing it was there. I brought a makeshift creel (a knapsack lined with a Safeway bag), in case I had to fake a fish homicide if a natural resources officer rolled up on me.

As the sun slipped behind the tree line, while spring peepers tuned up the band, I caught a mess of largemouth and crappie and bluegill, each of them somehow managing to wriggle out of my hand before they made it to the creel. Yet they didn’t have me feeling like an outlaw; they made me feel what they always do: gratitude. Helping me live just a little lighter.

As Jim Harrison wrote: “Fishing does what poet Tom Crawford said about bird watching: It removes the weight of what we’re not.”

While too many of our fellow citizens have perished, while two of my cousins and one of my nephews are in quarantine, while the woman at Safeway courageously bagging my groceries told me she was staying healthy, “but some girl at Giant just died” (she offered this matter-of-factly, a-grocer-turned-grizzled-infantryman), it was good to see old friends. They might just be fish. But they’ll do. Especially with the rest of our friends locked away.

Matt Labash, formerly a national correspondent at The Weekly Standard, is the author of “Fly Fishing with Darth Vader.”