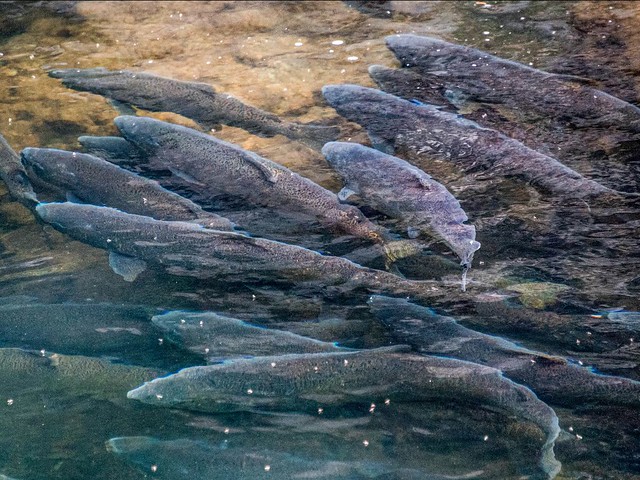 From: the Native Fish Society

Yesterday, alongside Umpqua Watersheds and the Center For Biological Diversity, Native Fish Society submitted a petition to the National Marine Fisheries Service to protect Oregon’s coastal spring Chinook under the Federal Endangered Species Act. The delivery of the eighty-seven-page document was the culmination of yearlong effort by NFS Staff, River Stewards, Native Fish Fellows, and our partners to build a sound argument on behalf of spring Chinook that is grounded in the best available science. However significant, it is not so much an achievement as a step toward curtailing the habitat destruction, human exploitation, disease and predation, increasingly diminished stream flows, and weak regulations that have driven the native spring Chinook of the Oregon Coast to the brink of extinction.

Though the Oregon Coast’s wild runs of spring Chinook have been in decline since the fifties, NMFS rejected a listing petition in 1994. The agency acknowledged the springer’s peculiar life history and unique habitat needs, but contemporary genetic data seemed to suggest that spring and fall Chinook could be managed as a single species. If spring runs disappeared, the agency reasoned, fall Chinook would simply replace them. In 2017, a University of California, Davis study proved otherwise. We know now that the spring life history in Chinook salmon is caused by a mutation in a single gene. If lost, it will not re-evolve.

Spring Chinook were once present in every Oregon Coast stream with a major estuary. We hope this petition will be remembered as a significant stepping stone in a process that not only protected the remaining wild spring Chinook of the Oregon Coast, but also restored their natural abundance. The story is already gaining traction with media outlets. Oregon Public Broadcasting, KATU, and Courthouse News have all run stories on the plight of the springer and the fight to save them.

Having taken an important step toward protecting Oregon Coast spring Chinook, I want to thank our partners at Umpqua Watersheds and the Center For Biological Diversity, NFS Fellowship Program Director Conrad Gowell, NFS River Steward Program Director Jake Crawford, the NFS River Stewards on the Oregon Coast, and our members for their sustained effort and continued support.