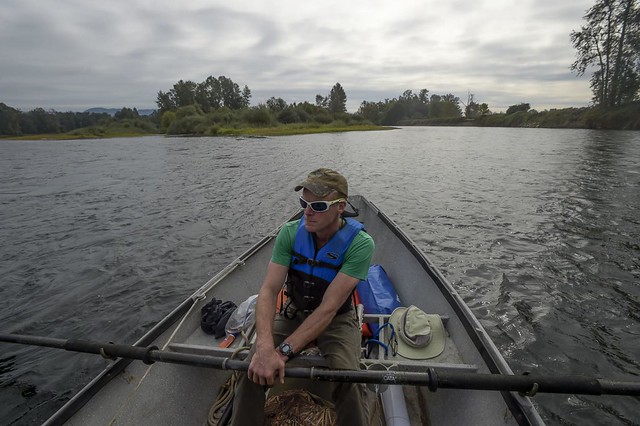 A national conservation group is highlighting threats to the Willamette River and calling on the federal government to take action to protect imperiled fish runs.

The Willamette was one of 10 waterways listed in the 2019 edition of “America’s Most Endangered Rivers,” which is being released today. The report, issued annually since 1984 by America’s Rivers, aims to call attention to looming environmental threats and opportunities to address them.

The group urges the U.S. Army Corps of Engineers to take immediate steps to protect imperiled spring chinook salmon and winter steelhead runs by improving operations at its 13 Willamette Basin dams. It also calls on Congress to secure funding for the work.

According to an advance copy of the report provided to journalists, an estimated 300,000 spring chinook and 200,000 winter steelhead once came back from the ocean each year to spawn in the headwaters streams of the Willamette Basin, but those numbers have plummeted since the dams’ construction, with fewer than 5,000 wild spring chinook and 1,000 wild winter steelhead making the return trip last year.

While those numbers are bolstered by the release of hatchery fish, many environmental groups argue those fish do nothing to protect the survival of wild populations and may even pose an additional threat.

With no functioning fish ladders, the report states, salmon and steelhead fighting their way upstream to spawn must be collected and trucked to the tops of the dams, while juveniles attempting to migrate downstream sometimes can’t get past the dams without being forced through power turbines.

The report asks the Corps of Engineers to live up to the terms of a federal biological opinion issued in 2008 in response to a lawsuit filed by the nonprofit watchdog Willamette Riverkeeper, which called on the corps to make significant improvements to fish passage and water quality at its Willamette Basin dams.

While some steps have been taken to improve conditions in the network – including new fish collection facilities at dams on the North and South Santiam rivers – many of the promised improvements remain unfinished more than a decade later, leaving some wild fish runs in grave danger, the report claims.

“The threat is inaction, to sum it up in a word,” said David Moryc, senior director of American Rivers.

“We have to do something to make sure Willamette River winter steelhead and spring chinook don’t go extinct.”

Plans are in the works to build downstream fish passage structures at Cougar Dam on the McKenzie River system and Detroit Dam on the North Santiam, but Moryc said both projects could be derailed by President Donald Trump’s budget request, which drastically cuts funding to the Corps of Engineers’ construction account.

The Democratic members of Oregon’s congressional delegation have written a letter to the leaders of the House Subcommittee on Energy and Water Development urging them to preserve funding for the work, and Moryc is asking Oregonians to make their voices heard on the issue.

He said the public can also push for more fish passage improvements by commenting on the Corps of Engineers’ latest studies on fish populations and water quality in the Willamette Basin.

“I think the good thing about a listing like this is that it elevates the issue and makes people say, ‘Hey, this is real – if we don’t do something, winter steelhead could go extinct in a couple of years,’” Willams said.

“We need this to happen in the next couple of years, to see real action and successful fish passage up and down the system, project by project,” he added.

“We need the corps to kick this thing into overdrive.”

The other waterways listed in the 2019 “America’s Most Endangered Rivers” report are the Gila River in New Mexico, New York’s Hudson River, the Upper Mississippi through Illinois, Iowa and Missouri, the Green-Duwamish River in Washington, Alaska’s Chilkat River, the South Fork Salmon River in Idaho, the Buffalo National River in Arkansas, Big Darby Creek in Ohio and the Stikine River in Alaska.

Ohio’s Cuyahoga was named River of the Year. Once so heavily polluted that it regularly caught on fire, the Cuyahoga became a symbol of the environmental movement and has undergone massive cleanup efforts.