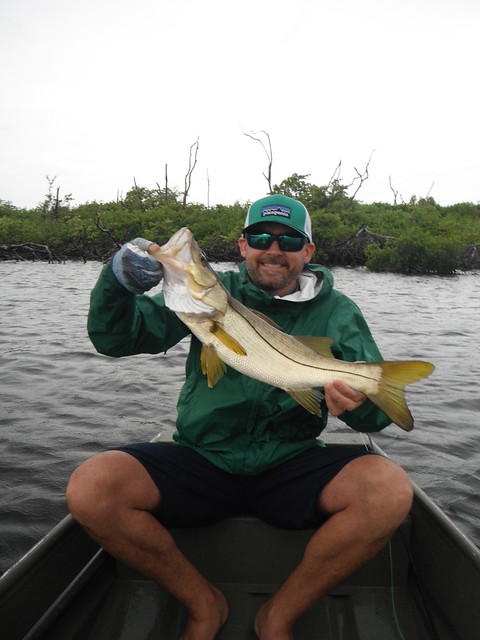 I just spent 2 weeks in Mexico for my 40th birthday with the plan to catch my first Tarpon. Flew into Cancun with my wife and another couple and drove to Tulum the first night. After stocking up on provisions we made the two-hour drive South to the village of Mahahual. Our rental house was right on the beach and within minutes I saw bonefish, barracuda and other reef fish cruising around the closest flat a mere 200 yard walk from our back door. Travel weary and hungry we made dinner and prepared for the 5:30 wake up call for our first day on the tarpon lakes.

We had booked a few days with guide Nick Denbow http://catchafish.net/ to explore the lagoons in search of tarpon. The area’s lagoons are land locked but connected to the ocean through underground passages called cenotes. The tarpon and snook smell the fresh water leaving the lakes on the ocean side and swim up the underground caves into the lakes. These are fish nurseries with most being babies or teenagers but we did see plenty of 50 pound and better fish rolling and swimming around. Our first morning we arrived just as it was getting light and we were soon cruising in a 12’ “john boat” out to the edge of what for the next 2 days we would call “the Hole”. This was on one of Nick’s favorite lakes and it holds the best population of Tarpon in the 20-pound class with plenty of much larger adults mixed in. “The Hole” was where the cenote was located in the lake. The average depth of the lake is 3 feet but here it dropped to over 100 feet. We saw some fish rolling around and I made several casts with a cockroach but none were hungry. We then motored to the mangroves and I switched to a gurgler and started casting to the edges. Within the first 10 minutes I had 3 or 4 tarpon strikes on top water, hooking 2 of them but they all came off during the fight. One 20 pounder was very memorable as after hooking up he instantly went airborne, my fly came unbuttoned and he practically flew into a tree. The rest of the day for me included more jumped fish but none landed. My spin fishing partner hooked a 40-50 pounder that he had right up to the boat before breaking off and he landed tarpon and a nice snook. Great start to my quest and fishing top water bugs for these amazing fish is a blast. 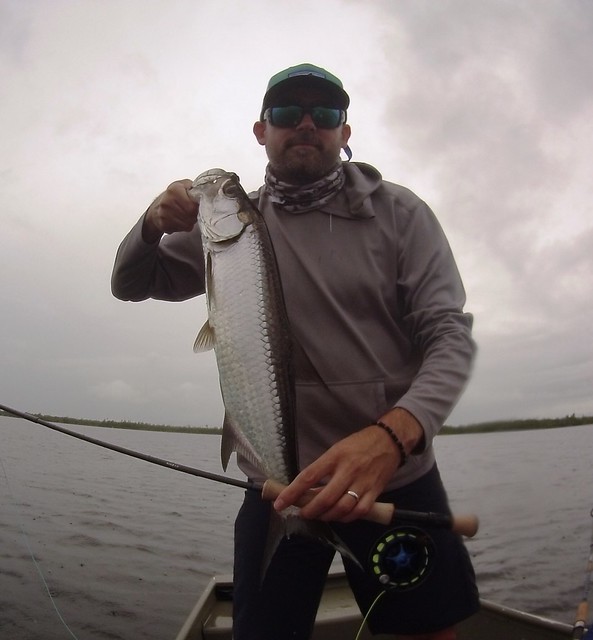 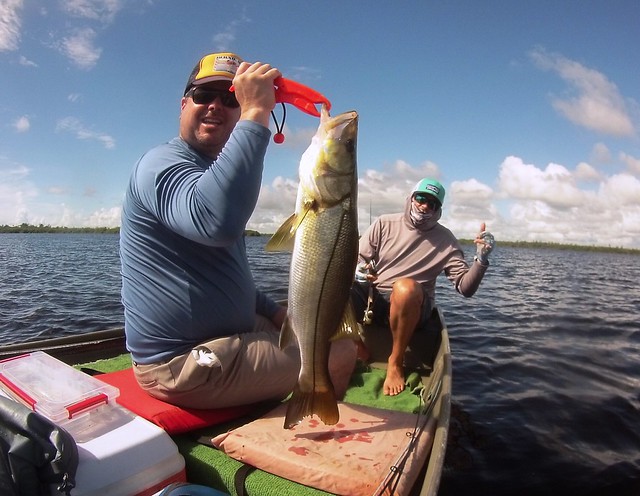 Day 2 started at one of the largest lakes and more gurglers thrown at the mangroves. Within the first hour I finally landed my first tarpon albeit it was also my smallest one of about 3 pounds. Day 2 tally ended with landing several tarpon up to 12 pounds and a good snook. The weather changed for the worse that day and it really wiped out the fishing for the rest of our trip. 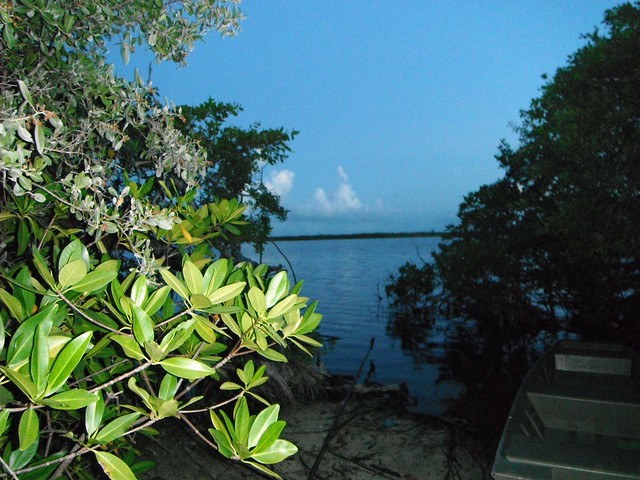 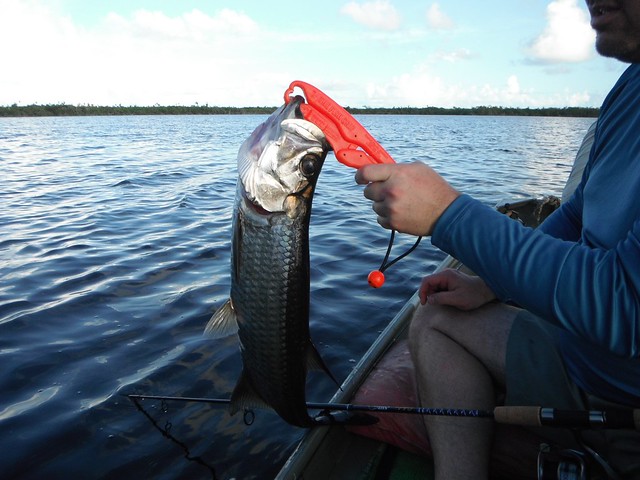 Our time in Mahahual was winding down and after tropical storm Olaf had sat directly on us for 3 days I had serious cabin fever so decided to try my luck one more time. So Day 3 was my birthday and Nick decided to take us to the lake with the biggest fish with the hopes of a trophy for my 40th. It was raining sideways with constant winds. The lagoons are somewhat protected from wind so even in bad weather they remain pretty “fishable”. I had invited my wife Tanya to go that day because I thought it would be fun for her to see the unique environment. Not the best choice as it rained even harder once we got there and never stopped. I jumped one good fish and had a couple other whacks but overall the fish were just not cooperating that day. On the positive side we did get to see some six footers roll around and it really gets your heart racing casting to a fish of that size.

All 3 of the lakes we fished had incredible bird life, saltwater crocodiles, and beautiful flora to gaze at while taking a break from the fishing. The tropical storm wiped out the chances of fishing the ocean side but in talking to locals there is 70 km of ocean flats, rocky points and bays that all hold bones, permit, jacks, barracuda, tarpon and snapper. There is a beach road running the entire length so access is very easy. On calm days Super Grand Slams are always possible. Nick is very professional and he really has it dialed down there. Being a British expat it is also nice having an English-speaking guide.

I fished the new Scott Meridian 8wt in the lagoons and all the hype you may have heard is true. Ridiculously lightweight blank was really nice when casting for 6-7 hours straight. Powerful action to bomb longer casts into the wind as well as incredible feel for the shorter 20-foot casts into and under mangrove branches. The cenote lagoons of the Southern Yucatan are a unique experience that I will definitely be back someday.